Puyat: Happy with current post, but no political plans 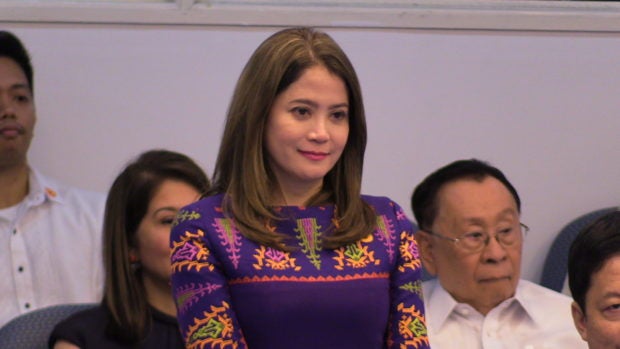 Two weeks into her new post, Tourism Secretary Bernadette Romulo-Puyat has yet to get used to the attention she has been receiving from the media and from her supporters.

This early, however, Puyat said she has no political plans.

“No, no. I just want to work. No political plans,” Puyat told reporters as she gamely posed for photos with Senate employees after the powerful Commission on Appointments (CA) confirmed her appointment as Tourism chief on Wednesday.

Asked if he is closing her door on politics, Puyat stressed that she is happy with her current post.

Of all government and military officials confirmed by the CA, Puyat received the most number of endorsements from senators.

Senator Grace Poe, who claims to have known Puyat since high school, was among those who stood up on the floor to endorse the confirmation of her “youthful and beautiful friend.”

“If she appears to be immune from political chaos, there can only be a very good reason for it: competence,” Poe said, noting that Puyat has served three presidents over the past 20 years.

“Mr. President, it’s my honor to endorse the confirmation of the appointment of our youthful and my beautiful friend as Secretary of Tourism,” said the senator.

Senate President Pro Tempore Ralph Recto said the DOT was “fortunate” to have Puyat, and that the agency “did not only get a manager, but an ad model as well.”

“The nominee might probably break the Commission’s record as to the number of endorsement speeches.That the support flows from both sides of the aisle is a testament to her record of clean, competent and committed public service,” Recto added.

Like Poe, Recto also cited Puyat’s track record as a public servant, particularly her stint at the Department of Agriculture.

Puyat said she was surprised, overwhelmed, and very grateful for the support she received from the CA. /ee