ZAMBOANGA BATTLE In this 2013 photo, soldiers in Zamboanga City gather around the Philippine flag, raised at half-staff, as the battle to retake sections of the city from armed men rages. EDWIN BACASMAS

ZAMBOANGA CITY — Tears streamed down Lourdes Omar’s face when she saw her daughter, Nuraisa, 24, standing behind the fence of the Philippine Air Force base here.

Nuraisa, who was flown home from Taguig City in Metro Manila, where she spent the last four years and eight months in detention, was among the 98 suspects in the 2013 siege in the city who were ordered freed by the court recently.

Twelve of them are residents of this city, 40 are from Basilan province and the rest, from Sulu province.

The Regional Trial Court (RTC) Branch 158 in Pasig City released the prisoners for serving the minimum prison sentence of two years for sedition.

Omar, 58, said her daughter was a freshman student, taking a hotel and restaurant management course, when soldiers picked her up at the height of the siege while the family was fleeing their home. “Nuraisa is not a rebel … The government snatched all her dreams,” she said.

She recounted how she, her husband and their 10 children were fleeing Sta. Catalina village when Nuraisa, then 19, disappeared.

“I thought all my children were tailing me but upon reaching the safe zone, I noticed that three of them were missing,” Omar said, referring to Nuraisa and her two children, 6 and 16 years old.

She returned to the place where she last saw her three children, but unable to find them for days, she volunteered to be a camp leader in the hope of finding them. Her 6-year-old and 16-year-old later found their way to the camp.

About two months later, policemen told her that a certain Nuraisa, who was detained in connection with the siege, was claiming to be her daughter.

She said it was the first time she saw Nuraisa after the siege. “She was dirty, in pain, and all I could do was watch from the distance. I promised to bring her home,” Omar said. 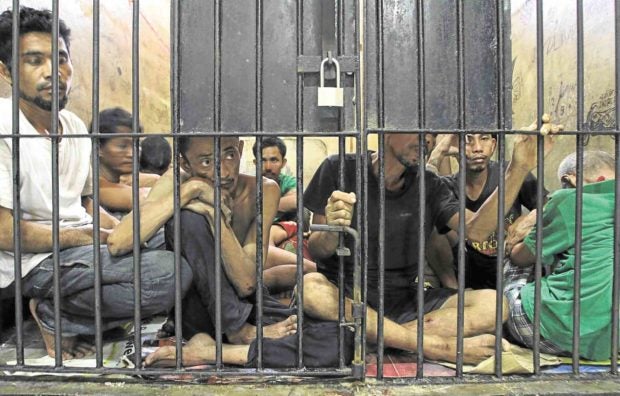 LOCKED UP Members of the Moro National Liberation Front are detained at the Zamboanga police station for taking part in a three-week siege of the city in 2013. —EDWIN BACASMAS

Nuraisa was then moved to the Special Intensive Care Area in Taguig, along with dozens of suspected members of the Moro National Liberation Front (MNLF) charged in connection with the siege.

A total of 278 people were arrested during the attack by followers of MNLF leader Nur Misuari, according to the Regional Human Rights Commission of the Autonomous Region in Muslim Mindanao.

All of them were jailed in Metro Manila, except for seven minors who were placed under the care of social workers.

On March 14, 2015, 42 suspects were ordered freed for lack of evidence to pin them down while the seven minors were released in August that year.

With the recent release, 131 suspects still remained at the Special Intensive Care Area of the Bureau of Jail Management and Penology at Bicutan, Taguig City.

Omar said she learned only on Sunday that Nuraisa would be freed but her freedom had nothing to do with her being innocent.

She said Nuraisa had pleaded guilty to sedition charges so she could enter a plea bargaining agreement with the court and get a lower penalty.

In her April 26 decision, RTC Judge Maria Rowena San Pedro said the 98 individuals were “guilty beyond reasonable doubt as accessories to the crime of sedition under Article 139 of the Revised Penal Code.”

However, she added that based on certifications issued by Chief Insp. Alberto Tapira Jr., they had “effectively served the penalty imposed upon them by their preventive detentions.”

Zamboanga City Mayor Maria Isabelle Salazar said she was saddened by the release of people behind the siege.

“But we will continue to fight for justice despite the recent order of the [RTC],” she added.

At least a dozen civilians were killed while about 70 others were wounded when MNLF gunmen went on a rampage here on Sept. 9, 2013, sending more than 100,000 residents to various evacuation camps. The siege lasted for about three weeks.

“I am still positively hoping that justice will be served to the victims of the Zamboanga siege and the remaining 100 MNLF accused will be held accountable for the crimes committed,” Salazar said.