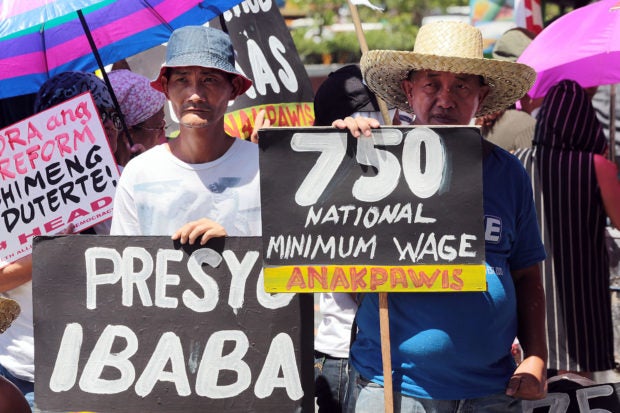 APPEAL TO LAWMAKERS Activists call on Congress to pass a new national minimum wage law and scrap the Tax Reform for Acceleration and Inclusion Act during a rally on Monday in front of the House of Representatives building in Quezon City. —GRIG C. MONTEGRANDE

A national daily minimum wage of P750 to be adjusted yearly by Congress, abolition of regional wage boards, and stiffer penalties for businesses not providing the floor pay.

These were among the things that the Makabayan party-list bloc is proposing when it filed House Bill (HB) No. 7787 on Monday.

The group filed the measure amid what it called the “exploding impact” of the Tax Reform for Acceleration and Inclusion (TRAIN) Act on prices and the disparity in wages across regions.

Labor Secretary Silvestre Bello III said he would support a national minimum wage if it would not put a strain on the country’s economic prospects.

Bello said his department would have to conduct a “very in-depth study” to find out if implementing a national minimum wage was viable.

Apart from considering the needs of workers, the capacity of employers to pay such wages should be looked into, he said.

Like the Makabayan bloc, the Associated Labor Unions-Trade Union Congress of the Philippines is demanding a uniform minimum wage nationwide but at a slightly higher amount of P800 daily.

Negros Oriental Rep. Arnolfo Teves warned that increasing the minimum wage would bring down the economy. “The companies will move out because it will increase the cost of production.”

Teves nevertheless said he would support the suspension of the TRAIN law’s excise on fuel.

Workers have attributed the sharp erosion of their wages’ purchasing power to the TRAIN law, which imposed on Jan. 1 an excise on goods like fuel and sugary drinks to compensate for raising the cap on tax-exempt personal income to P250,000 annually.

A surge in global oil prices along with the excise has pushed pump prices of oil products up, causing a domino effect on goods and services.

Not due to tax alone

Inflation rose to a five-year high of 4.5 percent in April, but government economic managers claimed that only 0.4 percent was due to the TRAIN law’s effects.

Apart from the law, other factors such as the peso depreciation and the trade deficit were fueling the rise in the cost of goods and services, said Labor Undersecretary Ciriaco Lagunzad III.

Senate President Vicente Sotto III cited the strong dollar and rising interest rates in the United States as factors that were driving prices up, as he cautioned against suspending the excise on fuel.

According to the authors of HB 7787, there is a need to “promote a living wage for the workers” and to “harmonize wage levels across regions with the national economic and social development plans.”

Under the bill, the uniform minimum wage rate would apply to all enterprises regardless of location, size or industry classification.

It also sought to tweak the criteria for the fixing of the minimum wage.

Deleting the Labor Code’s provision that stressed the balance between adequacy and economic feasibility, the Makabayan bill proposed that the minimum wage should be set at a level “necessary for raising a family and maintaining its decent existence.”

It said the minimum wage rate should take into account the cost of food, clothing, shelter, education and health, the physiological and social needs of families, the adjustment of wages in accordance with the consumer price index, and the improvement of living standards.

Should it be enacted, the measure would prohibit businesses from laying off workers or resorting to downsizing on the basis of complying with the minimum wage increase.

The bill also sought to impose stiffer penalties for violations of the national minimum wage.

It proposed a fine equivalent to 100 percent of the total amount due the workers, multiplied by the number of days that the wages had gone unpaid.

The measure also sought to suspend the business permit of violators for one month for the first offense and three years for the second offenses. The third offense would lead to the permit’s cancellation under the proposal.

In the explanatory note, Makabayan Representatives Ariel Casilao, Carlos Isagani Zarate, Emmi de Jesus, Antonio Tinio, Arlene Brosas, France Castro and Sarah Jane Elago lamented that “unlike other commodities whose prices automatically move up and down the base line according to the swings in the market, workers have to fight for their minimum wage.”

The fact that fuel prices tend to be higher in regions far from Metro Manila while its workers earn lower than those in the capital only “exposes the unfairness” of the regional wage boards, according to the bill.

Government agencies will meet on June 5 to assess economic conditions and to talk about their coordinated approach to workers’ demand for higher wages, said Maria Criselda Sy, executive director of the NWPC. —WITH A REPORT FROM DJ YAP

Read Next
Roque says admin spooked by surging oil prices
EDITORS' PICK
Acer Philippines welcomes you to its first flagship store
Is your company a growth champion? Stand up and be recognized!
New Year, New Rediscoveries
CHEd steps into UP-DND row over ‘problematic’ accord, to broker talks
Lacson advises vaccine czar to ‘watch his back’
Climate advocates among first to cheer new US president
MOST READ
LOOK: Duterte registers for the national ID system
Lacson advises vaccine czar to ‘watch his back’
Western Visayas PNP crime lab chief sacked after saying 7 of 9 IPs killed in CIDG raid negative in paraffin tests
IATF OKs licensure exams scheduled from January to March 2021
Don't miss out on the latest news and information.