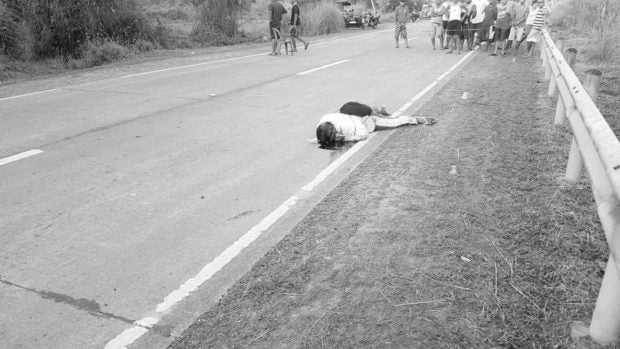 IMPUNITY Ruben Sabia, bodyguard of Mulanay Mayor Joselito Ojeda, lies dead on the road after he was shot by two gunmen. —PHOTO FROM THE PHILIPPINE NATIONAL POLICE

LUCENA CITY — The mayor of Mulanay, Quezon province is demanding the immediate replacement of the town’s police chief after the killing of his security escort which he said was just one of many cases showing a breakdown of peace and order in the town.

“What is happening now in our peaceful town?” Mayor Joselito Ojeda said in a phone interview.

Police said the victim, Ruben Subia, was on his motorcycle when he was gunned down by two unidentified men on another motorcycle in the village of Sta. Rosa on Saturday.

Ojeda blamed the breakdown of peace and order in his town on the local police force.

“I don’t even know the policemen assigned to our town,” Ojeda said.

“They are all busy performing tasks not related to maintaining peace and order,” he said.

He also called on Quezon Gov. David Suarez to help appoint a dedicated officer as police chief of his town.

He said he had requested Araja for a meeting at the
mayor’s office “but I was ignored.”

Ojeda said since Araja was assigned to Mulanay on May 8, the police chief has yet to meet with him.

Araja, in a phone interview, confirmed that he has yet to see Ojeda because he was busy performing his tasks as police chief.

Ojeda alleged that Araja and the local police force were busy acting as security escorts of former Justice Secretary Vitaliano Aguirre II and his close relatives.

Last week, Felix Moldon, reelected council member in the village of Sta. Rosa, was killed while waiting for a ride on the roadside.