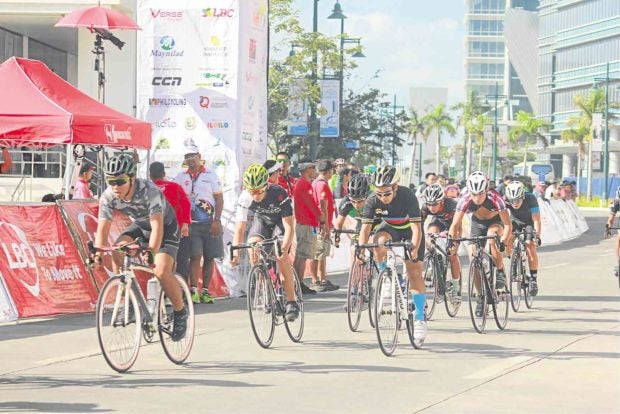 Organizers capitalized on the “renaissance” of both cycling and arts in this city of 447,992 to promote the event as a “BIKEcation Destination.”

About 5,000 cyclists from Panay Island, Negros Occidental province, and the cities of Cebu and Davao and Metro Manila joined the festival.

Those who were not from Iloilo City showed up “because they love Iloilo, the food, the people and they are at home with us,” said Wilfredo Sy Jr., event director.

Love for cycling and the arts met at the crossroads when acclaimed artist and biker, Rock Drilon, helped resuscitate the Iloilo art scene and Sy decided to be a biker in 2013.

Drilon, a native of Dumangas, relocated to Iloilo City from Manila six years ago, and found that art exhibits were being promoted only at the University of the Philippines Visayas and at Museo Iloilo but these were not sustained.

Sy, who joined iFOLD (Iloilo Folding Bike Riders), learned the ropes of running cycling events from Ronald Sebastian, director of the Iloilo Bike Festival from 2014 to 2017.

With the country’s second oldest city placing premium on culture, arts and heritage, ARTbike took bikers to seven key art hubs, while VisiTOUR had heritage sites of the city as destinations. All could be done within three hours.

Those who joined ARTbike assembled at the Iloilo Museum of Contemporary Art (Ilomoca) along the Festive Walk of Iloilo Business Park in Mandurriao District at 7:30 a.m.

The first stop was Gallery I at E. Villanueva Building (Iloilo International Hotel) on JM Basa and Aldeguer Street. It featured the “cycling heARTS” exhibit up to May 23.

Bikers proceeded to Cinematheque Art Gallery for the “The Backroom Show.” It displayed selected works from the inventory of Gallery I, as curated by Ilonggo artist, Allain Hablo. 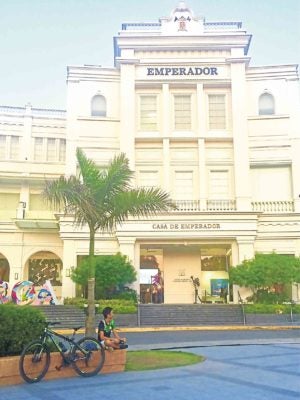 Casa de Emperador (above) houses the Iloilo Museum of Contemporary Art at Iloilo Business Park, where bikers (top photo) kick off the art and bike event with a race. Hazel P. Villa

Next, they went to the nearby Museo Iloilo on Bonifacio Drive, which showcased the exhibit “Dos” by Frank Nobleza and some works from the Museo’s Children Summer Art Workshop.

Fourth stop beside Museo Iloilo was a treat — a special advance tour of the National Museum Western Visayas, an old prison from 1911 that was converted into a museum with its galleries to feature the cultural and natural heritage of Panay Island and Negros Occidental.

The fifth stop was Et Nos Gallery at Lizares Mansion (Angelicum School Iloilo) in Tabuc Suba, Jaro District, which showcased the exhibit “Of Premises Past” by Ilonggo artists.

From Jaro, bikers continued to the sixth stop at Galerie De Arsie in Sumcio Subdivision in Mandurriao District’s Barangay Q. Abeto-Mirasol. Four floors of art space held more than 300 artworks, mostly by Ilonggo artists from the collection of Sen Rafael.

The seventh and final stop was at Ilomoca, said to be the first and biggest museum in the Visayas region dedicated to modern and contemporary art.

The participants were treated to five exhibitions.

“Ilonggo Country” at Gallery 1 featuring works by established and emerging Filipino artists who traced their roots to Iloilo or Western Visayas.

“A Presence Beyond the Native” at Gallery 2 showcasing works by major foreign artists who had contributed to global art, like Joan Miro, Salvador Dali, Victor Vasarely and Marc Chagall.

Gallery 3 was devoted to sculptures and works by national artists, while Adoracion Valencia Gallery had artworks especially chosen by Ilomoca patron Edwin Valencia.

The fifth exhibit, “Hulot,” on the ground floor, paid tribute to Ilonggo hero Gen. Martin Delgado, whose statue is found outside Ilomoca, and displayed the works of Spanish artist Gines Serran Pagan.

“We established 16 art destinations as of counting, but we only chose seven for ARTbike-Iloilo Bike Festival due to time constraints. We cannot probably finish all in three hours or one morning. Between Ilomoca and Galerie De Arsie, we’re already talking of about 500 artworks,” Drilon said.

It is all about heritage for VisiTOUR, which Sy described as a city tour on bicycle for guests of the Bike Festival.

The first stop was Jaro Plaza in Jaro District, site of the Philippines’ first millionaire’s row and seat of the Roman Catholic Archdiocese of Jaro.

From Jaro, bikers proceeded to Casa Real De Iloilo, the Old Capitol Building of Iloilo on General Luna Street at the heart of the city.

Molo Plaza across St. Anne Parish Church, generally known as Molo Church, and described as a “feminist church,” was the final destination.

Considered the only Gothic church outside Metro Manila, Molo Church has a female patron saint and its aisle pillars on both sides hold statues of 16 female saints. 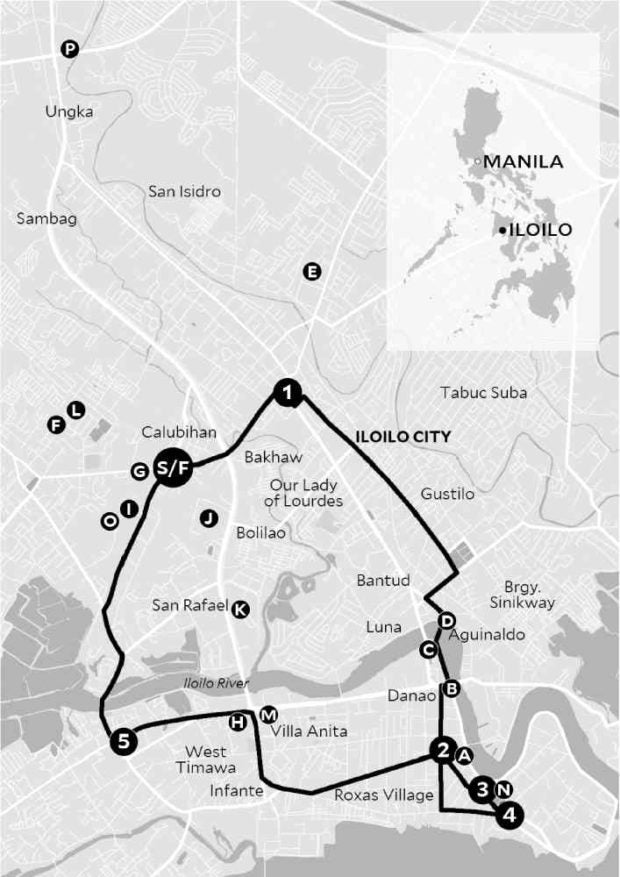