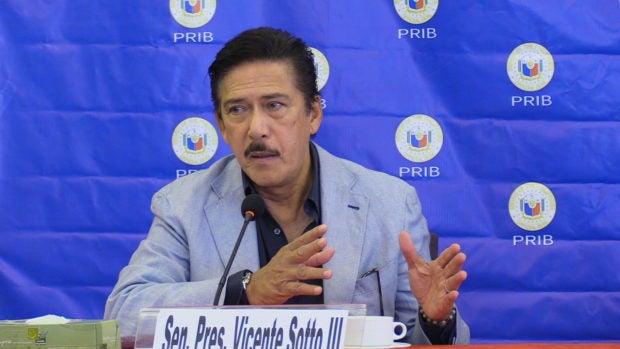 Sen. Aquilino “Koko” Pimentel III will be given the chairmanship of three committees, as well as a seat in the powerful Commission on Appointments (CA), according to Senate President Vicente Sotto III, who denies that this is a concession following Pimentel’s removal from the Senate leadership.

“We didn’t even talk about the chairmanships of the committees when we were discussing the Senate leadership,” Sotto said, referring to his discussions with Pimentel last week on the Senate reorganization.

He replaced Pimentel as Senate President on Monday, after 16 of the 17-member majority bloc elected him.

Sotto had said then that the majority bloc was willing to give Pimentel any committee chairmanship he wanted.

At his first Kapihan sa Senado forum as Senate president, Sotto said on Thursday that Pimentel already got the chairmanship of the committee on trade and entrepreneurship, which was formerly headed by Majority Leader Juan Miguel Zubiri.

Pimentel is also now the chair of the joint congressional oversight committee on the electoral system, he said. Sotto said Pimentel would also get the chairmanship of another committee, possibly the local government committee currently headed by Sen. Sonny Angara.

The Senate already elected Pimentel as a member of the CA, replacing Sen. Manny Pacquiao, who held the seat for two years. — CHRISTINE O. AVENDAÑO