The government task force leading the rehabilitation of Marawi City has vowed to provide houses to 5,900 families remaining in evacuation centers in the provinces of Lanao del Sur and Lanao del Norte, hoping to finish this task by the end of the year.

The country, on May 23, marked the first year since hostilities broke out in Marawi when Islamic State-inspired groups, led by the Maute brothers, laid siege to the Lanao del Sur capital. The battle raged for five months.

Eduardo del Rosario, Task Force Bangon Marawi (TFBM) chair, said the core of the government’s efforts to rebuild Marawi was focused on the temporary housing facility at Barangay Sagonsongan, but the biggest challenge was the delivery of water and electricity.

“We have been trying to dig for deep well, but we have been unsuccessful. We found one, but it is producing too little a day,” he said.

By June, the task force hopes 400 more families would have gone back to their hometowns. Financial assistance for these families will be distributed in July.

Del Rosario also dismissed fears of displacement as the government races to meet a tight timetable in its rehabilitation efforts. 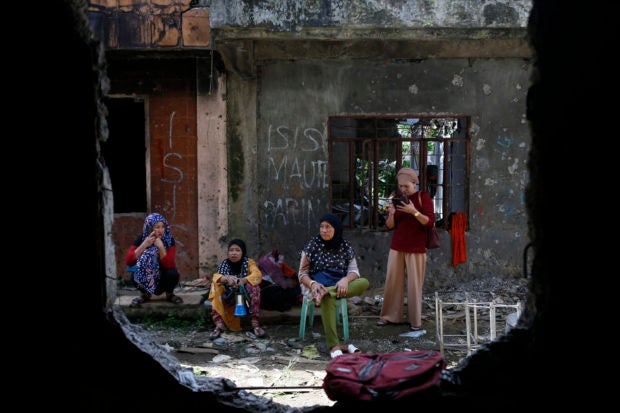 HOMECOMING Early this month, the government allowed residents in villages comprising Marawi City’s main battle area to return to their communities and check their houses and belongings.—JEOFFREY MAITEM

“In most affected areas, residents who will be recognized, the land will become theirs, except perhaps for those who used to live in coastal areas and on road easements because they were not supposed to be there in the first place,” he said.

“The magnitude of destruction of this disaster is immense, but we are doing best to fast-track the process,” he said in a phone interview.

Rebuilding efforts would have to contend with the cultural sensitivity of working in a place like Marawi, Del Rosario said.

“Marawi is the center of trade in Lanao del Sur, and the only Islamic city in the Philippines. We need to put up infrastructure that will meet the needs, as well as conform to the cultural sensitivity of the place,” he said.

While TFBM is doing its best to speed up the construction of permanent housing for evacuees, it is careful not to shortcut procedures and violate laws, Del Rosario said.

Aside from permanent shelter, the rehabilitation program also aims to provide livelihood packages to Marawi residents through the departments of trade and industry, agriculture and agrarian reform.

The TFBM also is also looking at arranging interest-free loans for residents.

The rehabilitation of areas outside ground zero, or the 24 villages considered as main battle area, will entail funding of P26.2 billion during the first year of reconstruction activities, the state planning agency National Economic and Development Authority (Neda) said.

In a press conference on Monday in Metro Manila, Neda Undersecretary Adoracion Navarro expressed confidence that even as only P10 billion had been allotted under the 2018 national budget for the Bangon Marawi Comprehensive Rehabilitation and Recovery Program (BMCRRP), the government could tap other fund sources, including grants from foreign countries.

The BMCRRP covers areas outside ground zero, while the center of last year’s conflict will be developed by the Bagong Marawi Consortium—comprised of five Chinese firms and four local companies—if its proposal wins the Swiss challenge this week.

Navarro said the government’s economic managers would ensure funding for the investment requirements this year. One upcoming source of financing, she said, would be the issuance of up to P30 billion in “Marawi bonds.”

She said the private sector “already have commitments which were brought to the government.”  Official Development Assistance was also received from the governments of Australia, China and Japan, she added.