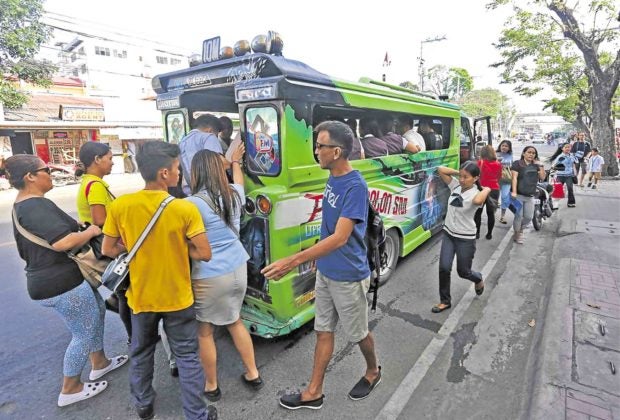 CEBU CITY — Transport groups here are seeking a P12 fare increase in the minimum jeepney fare to allow drivers and operators cope with the series of price hikes implemented by oil companies.

If the petition by the Basak Lapu-Lapu City Jeepney Operators and Drivers Association (Balacjoda) here would be granted by the Land Transportation Franchising and Regulatory Board (LTFRB) in Central Visayas, the basic minimum fare in Cebu would reach P18.50, almost three times its present rate of P6.50.

The National Confederation of Transportworkers Unity (NCTU), where Balacjoda is a member, said the increase was necessary.

Romeo Armamento, NCTU-Visayas chapter president, said some drivers had been forced to stop plying their routes because of high fuel prices.

He said a jeepney plying the Mandaue City to Cebu City route consumed an average of P600 worth of fuel a day before the recent oil price adjustments. But when their fuel expenses reached P900 a day due to successive oil price hikes, the driver’s take home pay dropped to less than P300 daily, said Armamento, whose group had around 2,000 members plying routes in the cities of Mandaue, Cebu, Talisay and Lapu-Lapu and in the towns of Liloan, Compostela and Minglanilla.

Ryan Benjamin Yu, Citrasco chair, said some of their members were already having problems paying rental of their jeepneys due to the high cost of fuel and traffic congestion. Citrasco, which has about 1,000 members, most of them jeepney drivers operating in Cebu City, had earlier planned to file a petition for fare increase.

On Tuesday, oil companies raised the prices of petroleum products by P1.60 per liter for gasoline; P1.15 per liter for diesel; and P1 per liter for kerosene. This was the highest increase in the domestic market this year, reports said.

In Negros Occidental province, transport groups had criticized the LTFRB for failing to grant provisional increases to allow drivers to cope with the increases in oil prices.

“The drop in drivers’ take-home pay has not only affected their day-to-day survival, it has also deprived them of much needed resources for their children,” said Jessie Ortega, secretary general of Sentrong Samahang Tsuper at Operator in Negros Occidental. — WITH A REPORT FROM CARLA P. GOMEZ