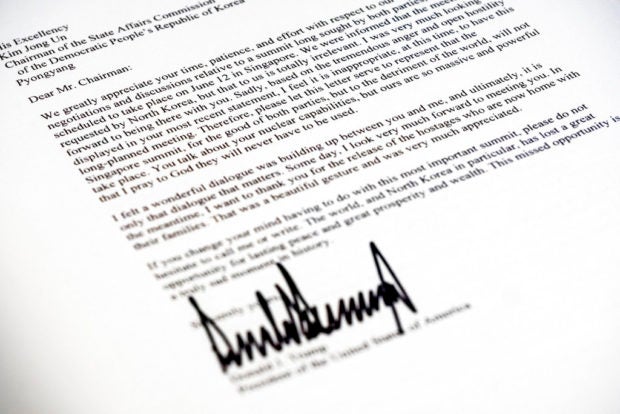 A copy of the letter sent to North Korean leader Kim Jong Un from President Donald Trump canceling their planned summit in Singapore is photographed in Washington, Thursday, May 24, 2018. (AP Photo/J. David Ake)

WASHINGTON —  President Donald Trump says the US military is “ready if necessary” to respond to “foolish or reckless acts” by North Korea.

Trump also says he’s been in touch with South Korea and Japan and that both allies are willing to bear much of the financial burden “if such an unfortunate situation is forced upon us.”

Trump says hopefully “positive things” will take place with respect to North Korea’s future. But he adds “If they don’t we are more ready than we have ever been before.”

Secretary of State Mike Pompeo says he was involved in discussions late Wednesday and early Thursday that led to President Donald Trump’s decision to pull out of a planned summit with North Korean leader Kim Jong Un. But, he would not say exactly which, if any, other countries were given a head’s up on the decision, including South Korea.

“I don’t want to get into who all we notified,” he told the Senate Foreign Relations Committee, adding: “The White House will speak to that at the appropriate time.”

However, Pompeo, who met at the State Department on Wednesday with China’s foreign minister, did say that he had not spoken to Chinese officials since the decision was made.

Asked about a report that South Korea had not been informed before the president’s letter to Kim canceling the summit was made public, Pompeo maintained that Washington and Seoul were “in lockstep.”

A prominent Russian lawmaker says the cancellation of the planned summit between President Donald Trump and North Korea’s Kim Jong Un is a serious setback.

Konstantin Kosachev, chairman of the foreign affairs committee in the upper house of the Russian parliament, is quoted by the news agency Interfax as saying: “The rejection by Trump of conducting the American-North Korean summit undoubtedly is a serious blow to peaceful settlement in the region.”

He adds that “it’s already the second blow, after the exit from the agreement on the Iranian nuclear program, to global stability in general.”

Moon played a prominent role in planning for the summit with Kim Jong Un, which was scheduled for June 12 in Singapore.
South Korea’s Yonhap News Agency quoted a presidential office spokesman as saying they “are trying to figure out what President Trump’s intention is and the exact meaning of it.”

Trump released a letter to Kim on Thursday saying he had canceled the summit because of “tremendous anger and open hostility” expressed in a recent North Korean statement.

He did not elaborate, but a North Korean vice minister of foreign affairs issued a statement referring to comments by US Vice President Mike Pence as “ignorant” and “stupid,” and saying North Korea is just as ready to meet in a nuclear confrontation as at the negotiating table.

The UN chief says he is “deeply concerned” by the cancellation of the planned summit between U.S. President Donald Trump and North Korean Leader Kim Jong Un.

Antonio Guterres told an audience at the University of Geneva on Thursday that he was urging the parties to keep working “to find a path to the peaceful and verifiable denuclearization of the Korean Peninsula.”

Guterres’ comments came as he laid out his disarmament agenda, warning that nuclear agreements between states have been threatened like never before.