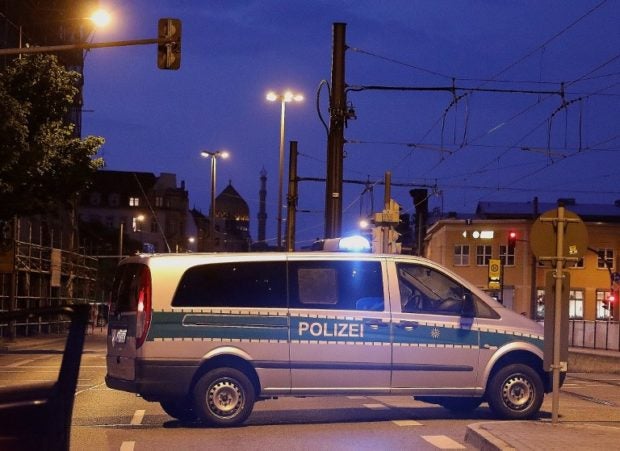 A police car blocks a road on May 23, 2018 to secure the area around the site in Dresden, eastern Germany, where a World War II bomb was found and is to be defused. Police said on May 24, 2018 that the city has extended a mass evacuation due to the difficult disposal of the bomb. AFP

Dresden, Germany — The German city of Dresden Thursday extended a mass evacuation sparked by the discovery of an unexploded World War II bomb after a failed defusal operation sparked a fire, police said.

“At the moment the danger level is quite high and an assessment of the situation is impossible,” local police said on Twitter about the bomb site near Dresden’s central railway station.

The fire near the 250-kilogram (550-pound) dud explosive forced security services to extend the evacuation of almost 9,000 people, including residents of two elderly care homes and a hospital.

The corroded aerial bomb had been discovered during construction work Tuesday in the Saxony state capital, which was heavily bombed toward the end of Second World War.

A police bomb squad managed to blast away the detonator late Wednesday, but the operation set ablaze materials that had been placed nearby to help absorb blast waves from a potentially larger detonation.

No-one was injured during the defusal operation in the cordoned-off area.

Police said that “the situation is difficult and our specialists will only be able to return once the fire has gone out and the area has cooled down”.

Some 25 flights in and out of Dresden were scrapped Wednesday as authorities closed the air space near the bomb site, and more flights were cancelled Thursday.

More than 70 years after the end of the war, unexploded bombs are regularly found in Germany, a potentially deadly legacy of the intense Allied bombing campaign against Nazi Germany.