2 dead, 18 hurt as train plows into truck stuck on tracks in Italy 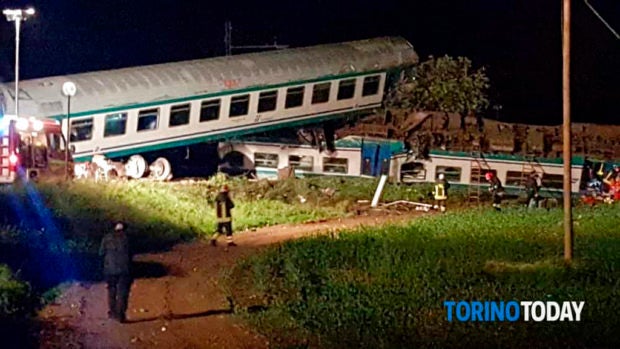 Firemen and rescue personnel work next to a train that plowed into a big-rig truck that was on the tracks, killing two people, including the train’s engineer. and injuring 18 passengers near Turin, northern Italy early Thursday, May 24, 2018.  (Torino Today via AP)

ROME — A regional train plowed into a big-rig truck stopped on the tracks outside the northern Italian city of Turin late Wednesday, killing at least two people and injuring 18 others, authorities said.

The Italian news agency ANSA said the first fatality was the engineer of the train, which smashed into the truck near the town of Caluso at 11:20 p.m. on a run from Turin to the suburb of Ivrea.

Later, one of two critically injured people who was flown by helicopter to a hospital died, ANSA said.

One of the less seriously injured was reported to be a crew member while the others were passengers. Ambulance dispatches said a total of 18 people were injured, most of them not critically.

The truck driver escaped injury, ANSA said. The rig, which carried Lithuania license plates, was headed to a warehouse not far away, it added.

The truck’s cargo, on the other hand, was not immediately known.

The Rfi regional railroad said the railway barrier had lowered properly before the train’s approach but for reasons unknown, the truck smashed through the barrier and ended up on the tracks.

ANSA quoted a young woman who broke her leg in the crash as saying she felt as if she was being pushed from behind, then fell. The passenger, who was not identified in the report, said she feared she would die, describing the scene as terrible.

Rescuers were searching the wreckage looking for any trapped passengers.