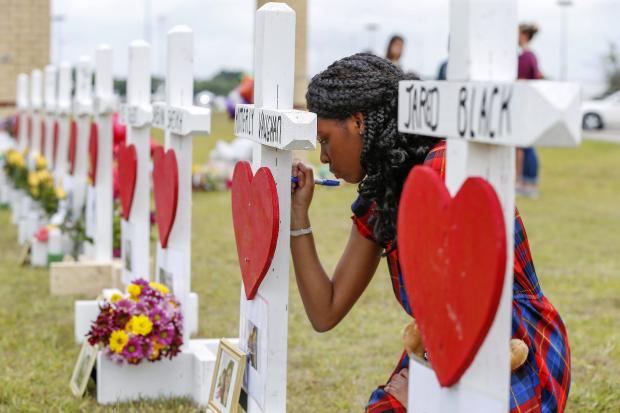 Santa Fe High School freshman, Jai Gillard writes messages on each of the 10 crosses in front the school Monday, May 21, 2018, in Santa Fe. Gillard, was in the art class Friday morning, knew all of the victims of the shooting. Texas Governor Greg Abbott has called for a moment of silence at 10 a.m. and came to the school to participate. (Photo by STEVE GONZALES / Houston Chronicle via AP)

ATLANTA — If you want to know where mass school shootings are most likely to occur, look no farther than small-town and suburban America.

The massacre that killed 10 people at a high school in Texas last week was just the latest to happen in a small or suburban city. Of the 10 deadliest school shootings in the US, all but one took place in a town with fewer than 75,000 residents and the vast majority of them were in cities with fewer than 50,000 people.

These are seemingly idyllic places to grow up: low crime rates, good schools and a sense of community where everyone seems to know your name. And it’s exactly those attributes, experts say, that are why small rural and suburban towns are a breeding ground for the next school shooter.

Experts say the phenomenon is due to a variety of factors that include easy access to guns and the copycat effect of disturbed suburban and small-town teenagers emulating each other. It’s also blamed on the pressures of living in small towns that make it harder for disgruntled teenagers to adjust.

“In small-town America, it’s said everybody knows everybody, and that’s well and good except when you don’t want everybody to know what’s going on with you,” said James Alan Fox, a professor at Northeastern University who has been studying mass shootings for decades.

“If things are going downhill for you, you did something wrong or someone did something wrong to you and some girl dumps you, everybody knows. So it’s much harder to get away from it,” Fox added. “Whereas in the big city, where no one knows your name, that can be a good thing. You don’t have this feeling that everybody knows what you’re going through. Being in a small town has its advantages in terms of a network and a sense of community but sometimes that can be a double-edged sword.”

Parkland, Florida, where authorities say a former student in February gunned down 17 people, had just recently been voted the safest town in Florida. Newtown, Connecticut, where a shooting in 2012 at Sandy Hook Elementary School took the lives of 20 children and six adults, is a classic New England town, seemingly a world away from the crime and problems of nearby Bridgeport, one of that state’s largest cities.

The site of the Columbine High School tragedy was a Denver suburb, the Virginia Tech massacre happened in a college town of about 40,000 people. The shooting last week took place in a town of 13,000 people about 40 minutes southeast of Houston.

The prevalence of the mass shootings in smaller cities stands in contrast to the situation in big cities like New York, Chicago and Los Angeles. They have strict gun laws and their own problems with street gun violence, but it’s rare that a mass shooting has been carried out in one of their schools.

In the 1980s and 1990s, urban districts sought to make schools safer from drug- and gang-related violence, taking such steps as installing metal detectors at entrances. That is exactly what pro-gun Republicans and the National Rifle Association have been proposing in the wake of recent massacres.

Some school security and psychology experts, as well as those who have been studying mass shootings for decades, say school designs and talk of arming teachers is a simplistic approach that doesn’t get at the heart of preventing it from happening.

While students often have a sense that a classmate might be planning an attack or know that someone is troubled, they might be more hesitant in smaller towns to tell anyone about it, said Langman, director of SchoolShooters.info. They know each other well, visit each other’s homes and families can be business associates.

“The best prevention is to catch them early before they show up with a gun rather than trying to make it hard for them once they’re already at the building with a gun,” he said.

Fox also said it’s hard to overlook the issue of copycats — and how much that can determine the types of locations where school shootings occur.