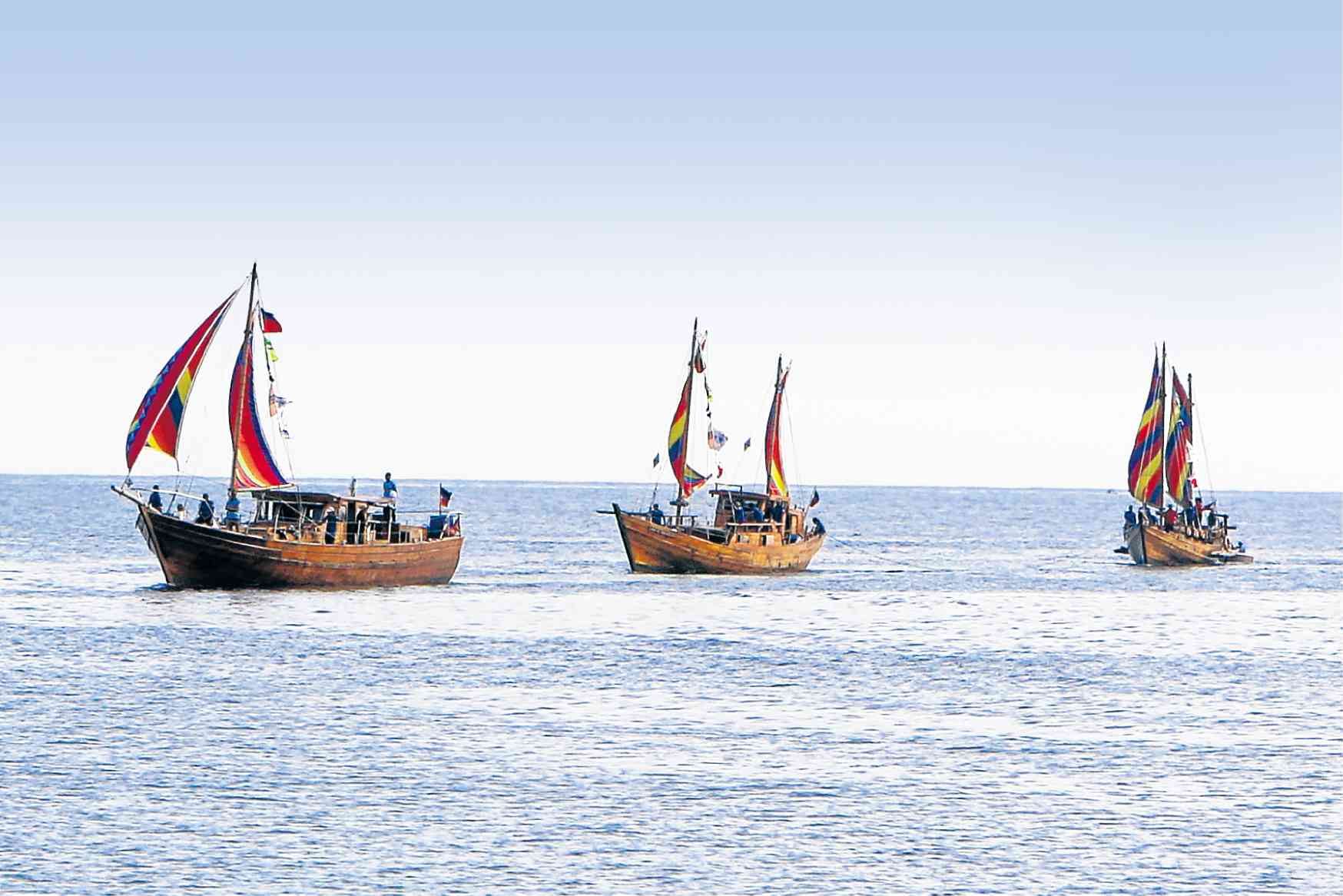 CONQUERING THE SEAS Three balangay, replicas of pre-Spanish Filipino boats, sail back to San Fernando City in La Union province after an expedition that took them to China. —WILLIE LOMIBAO, FILE PHOTO

The Balangay boats that sailed to China are home.

The crew members were welcomed in a ceremony at the prestigious Manila Yacht Club in fashion akin to the traditional Filipino boat: Simple and No frills.

READ: ‘Sailing is in our DNA’: Balangay back from voyage to China

The voyage took off from Poro Point in La Union on April 30. The three boats, all replica of the mighty Balangay, with 11 crew members each reached Xiamen two days later.

The crew disembarked in Xiamen and rode a train to Beizhou in Xiandong province to pay respects to the remains of Sulu Sutan Paduka Batara, who was laid to rest there 601 years ago.

Batara, according to Navara, died in China after visiting the foreign country in 1471.

The Chinese government, under Emperor Yongle of the Ming Dynasty, as a tribute to their friendship, gave Batara a funeral befitting a foreign ruler and laid his remains in a hectare of land.

Batara’s family was also allowed to stay within that land so they could take care of his tomb.

Navara said 19 generations later, Batara’s family is still living within the vicinity. They are now Chinese citizens but were allowed to keep their Muslim names.

“Aside from tracing our maritime history, we also want to commemorate our friendship with China that date 601 years back,” Navarra said.

The trip was historic, said Navarra, and the country may never see a repeat of it — at least not anytime soon.

The voyage was planned in 2008 but it took 10 years to fulfill it. The wind, literally, was finally on their side.

Balangay boats have no engines and radars. As sailboats, they are heavily dependent on the wind.

The expedition was smooth sailing except on May 6, when the seas were rough and the skies were foggy.

“The crew couldn’t see anything at that time. The danger was since we didn’t have any radar, we couldn’t alert the bigger ships about our presence,” he said.

Navarra said the organizers called the expedition “From Mountain to the Seas adventure.” The crew members were also part of the Filipino mountaineers who climbed Mt. Everest.

“After the Mt. Everest climb, we thought, why not do something that promotes our culture. So from Team Everest, we evolved into Team Balangay,” Navarra said.

With the homecoming, Navarra could only wish one thing: For the Filipino youth to remember that Philippines is an archipelagic country and that once in our history, our Filipino ancestors were masters of the sea.