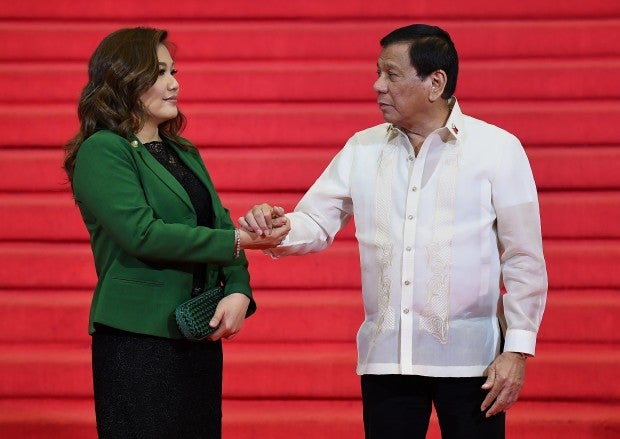 TACLOBAN CITY – The partner of President Duterte defended his decision to fire some government officials for alleged corruption.

Honeylet Avanceña said those who received the axe should not begrudge the President since it is also hard for him to let them go because they were his friends.

“Bug-at gud sa iyaha na naapoint niya and then kailangan niya tanggalun kay friends niya (It was heavy on his part that he appointed them and then had to let them go because they were his friends),” she said in her speech during the inauguration of the six-story main building of the new Eastern Visayas Regional Medical Center (EVRMC) in Barangay Bagacay, Tacloban City, Leyte on Tuesday.

Avanceña said these officials were fired due allegations of corruption.

“(When he first run for office), he promised to stop drugs and corruption,” she said.

The President has fired several officials who were linked to corruption, among them former Tourism Secretary Wanda Teo.

Another supporter of the President, actor Cesar Montano, resigned as tourism board chief due to allegations of irregularity in his Buhay Carenderia program worth P80 million.

Avanceña pointed out that some of these officials were among those who convinced Mr. Duterte to run for office in 2016.

“He doesn’t enjoy it at all,” she added.

“Thats why, his heart was in pain that he had to fire them. There was nothing he could do,” she said in Cebuano.

“He is just (being) true to his promise na he is going to stop corruption,” Avanceña added.

She pointed out that investments in the country would thrive if problems of corruption and illegal drugs were solved.

Secretary Christopher “Bong” Go, special assistant to the President, said the public should expect more government officials to be fired due to corruption.

“Maybe someone would get fired every week or every month for failing to follow the President’s campaign against corruption),” he said.

Go was also present during the inauguration where he turned over P15 million taken from the President’s socio-civic project to defray the cost of the Malasakit Center at the EVRMC which serves as a one-stop shop for poor patients confined in the hospital.