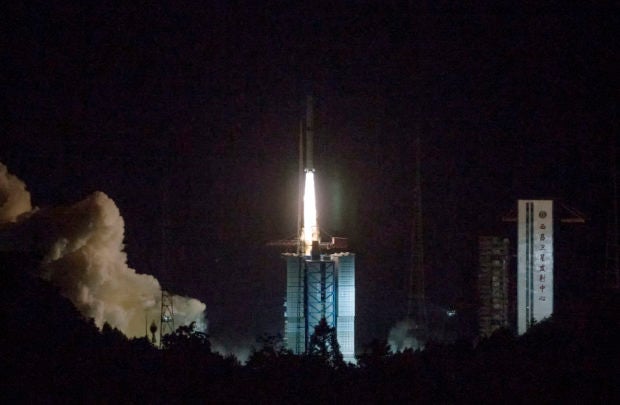 BEIJING (AP) — China launched a relay satellite on Monday as part of a groundbreaking program to be the first to land a spacecraft on the far side of the moon later this year.
The satellite, lofted into space aboard a Long March-4C rocket, will facilitate communication between controllers on Earth and the Chang’e 4 mission, the China National Space Administration said on its website.

China hopes to become the first country to soft-land a probe on the moon’s far side, also known as the dark side because it faces away from Earth and is comparatively unknown.

The satellite, named Queqiao, or “Magpie Bridge,” after an ancient Chinese folk tale, was launched from the Xichang Satellite Launch Center in the southwestern province of Sichuan, the Space Administration said.

The launch is a “key step,” but the satellite’s mission must still overcome challenges including making multiple adjustments to its orbit, “braking” near the moon and using lunar gravity to its advantage, project manager Zhang Lihua was quoted as saying by the official Xinhua News Agency.

According to the administration and website space.com, Queqiao was expected to arrive shortly at the Earth-moon Lagrange point 2, a gravitationally stable spot located 64,000 kilometers (40,000 miles) beyond the far side of the moon.

Without such a communications relay link, spacecraft on the far side would have to “send their signals through the moon’s rocky bulk,” space.com said.

China previously landed its Jade Rabbit rover on the moon and plans to land its Chang’e 5 probe there next year and have it return to Earth with samples — the first time that has been done since 1976.

China conducted its first crewed space mission in 2003, making it only the third country after Russia and the U.S. to do so and has put a pair of space stations into orbit.
Upcoming missions include the launch of the 20-ton core module for the still orbiting Tiangong 2 station, along with specialized components for a 60-ton station that is due to come online in 2022 and a Mars rover planned for the mid 2020s.

However, the failure of China’s Long March 5 rocket last year was seen as dealing a rare setback to the highly successful space program, delaying some missions and offering rival India a chance to move ahead in the space rankings.