Pimentel bows out; nominates Sotto as next Senate president

Senator Aquilino “Koko” Pimentel III stepped down as Senate president on Monday, paving the way for Senator Vicente “Tito” Sotto III to take the helm at the upper chamber.

Pimentel announced his decision to resign in a press conference at the Senate before convening a caucus of the majority bloc.

“This is an example of a peaceful and willing transfer of power in the Senate,” Pimentel said.

He said he would nominate Sotto as his successor, and noted that Senate’s reorganization will be implemented with minimum disruption.

Pimentel, who served as the leader of the upper chamber for two years, said the change in leadership was planned and he had no ill-feelings toward his colleagues in the majority bloc.

“It’s a normal feeling. We should always be open (to) change. Change happens all the time,” he said. 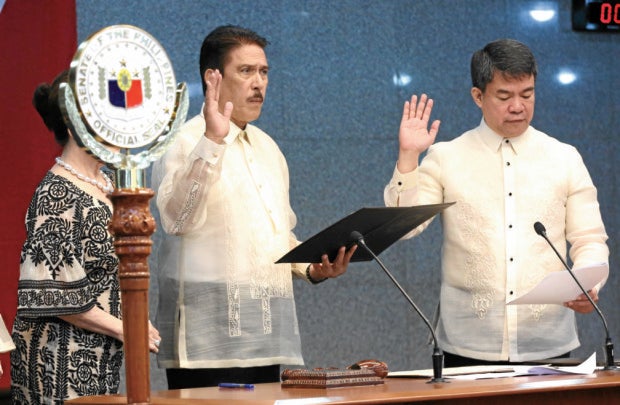 Pimentel then cited the passage of legislations that materialized President Rodrigo Duterte’s campaign promise and agenda – such as the free tuition fee and free irrigation laws among others – as his achievements while leading the Senate.

“It has been an honor and privilege for me to serve the Senate as its president, a position once held by my father,” he said.

The changing of guards at the Senate developed as the majority of the chamber’s members – 15 of 23 – has already signed a resolution picking Sotto as the new Senate president.

The resolution, “Expressing the sense of the Senate to re-organize its leadership and electing Senator Vicente ‘Tito’ Sotto III as new Senate President” reads: “By a majority of all the senators, Senator Vicente C. Sotto III is hereby elected as the new Senate President to discharge the duties and powers granted to him by the rules of the Senate.”