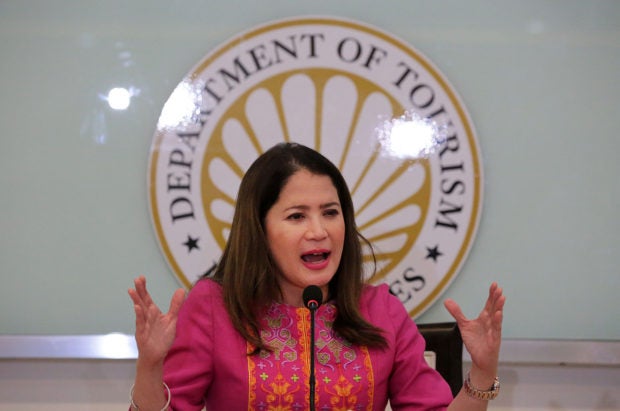 Less than a week into her new job, Tourism Secretary Bernadette Romulo-Puyat admits to being overwhelmed by the number of what she describes as irregularities in the projects promoted by the previous leadership at the Department of Tourism (DOT).

Puyat was so appalled at the level of corruption that she teared up during a television interview on ABS-CBN on Friday night while talking about the misuse of DOT funds.

“It’s so shocking because I’m discovering something new every day. And it’s saddening because large sums of money are involved here. Not just P1 million or P2 million, but hundreds of millions,” she said.

The secretary has ordered the suspension of all DOT projects pending the results of a review by the Commission on Audit (COA).

In a May 17 letter to COA Chair Michael Aguinaldo, Puyat asked for an audit of “all ongoing and pending” programs of the DOT and its agencies, such as the Tourism Promotions Board (TPB).

It breaks her heart that some DOT officials are involved in the fund mess while poor farmers continue to suffer, said Puyat, an undersecretary at the Department of Agriculture before President Duterte appointed her to head the DOT.

Among the contracts she has put on hold is the “Buhay Carinderia” of the TPB, whose chief operating officer, Cesar Montano, already paid P80 million to the project organizer even before the video series on Filipino street food and eateries had aired.

Montano, however, washed his hands of the deal and instead pointed to Wanda Tulfo-Teo—“my boss”—who pushed for the early payment to Marylindbert International, the marketing agency owned by Erlinda Legaspi. He said Teo introduced Legaspi to him, saying she was a “friend.”

Puyat has also ordered a review of the foreign travels made by tourism officials.

“You did not enter the government service just to tour around the world. That’s why [the government has embassy] attachés,” she said.

Teo, Puyat’s predecessor,  was criticized last year after she brought her executive assistant and utility workers to a number of foreign trips.

In December 2017, the President fired officials of the Presidential Commission for the Urban Poor, including its head, Terry Ridon, for excessive trips abroad. Mr. Duterte cited the same reason in firing Marcial Amaro III, the former administrator of the Maritime Industry Authority, in January.

PH not hosting Miss U

Puyat also confirmed that the country would not be hosting this year’s Miss Universe pageant due to “insufficient funds.”

In a separate radio interview, she said the agency “would just focus on other things.”

While the private sector had pledged to shoulder the bulk of the costs in hosting Miss Universe, Puyat said the government would still pay up for other services for the international pageant, including security.