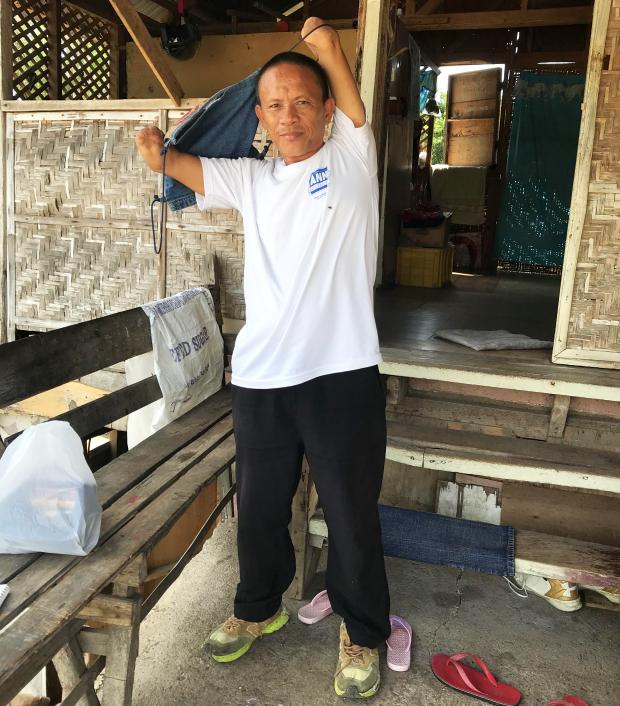 After losing both his arms and four toes of his right foot in a construction accident, Crispin Patrimonio, then 26 years old, asked that he be allowed to die and that any assistance be given to support his young family.

Crispin barely finished his Bachelor of Arts in Industrial Education, Major in Industrial Arts, course at the Central Visayas Polytechnic College when he married his high school classmate Celestina in 1990. They were both 20.

But instead of pursuing a teaching job, Crispin started to enjoy making money as a casual employee in a softdrink company. Six years later, Crispin left the soft drink job to learn welding as an apprentice in his cousin’s shop.

Then the accident happened.

“The steel bar I was holding was sucked by a transmission wire and I got electrocuted. I was burned all over. When I came to, I realized that the doctors cut both my arms and four of my toes,” Crispin said.

Luckily for Crispin, his family refused to grant him his death wish.

Celestina and their two sons, Alvin Chris and Lauren Dale, nursed him back to health and helped him adjust to his new normal. Then their daughter, Natalie, was born a year later.

After six years of joblessness and feeling sorry for himself, Crispin slowly started to recover.

“If others are able to accept me for who I am, who am I not to accept my condition?” he asked.

Crispin pursued his dream of getting a home and he applied with the Habitat for Humanity.

For his sweat equity, Crispin proved that even without arms, he could shovel sand into a sack do other manual jobs.

Once he left their Tabuctubig neighborhood to live in their new home at the Habitat 3 Village in Bajumpandan, Crispin started selling banana cue around their village.

“The banana cue, which my wife cooked, would be dangling from my right limb while my earnings would be hanging in a bag on my other limb,” he said.

His perseverance and industry got him noticed in his village to a point that he was invited to run for barangay kagawad to fill the last vacant slot in a slate. He came out number 2 out of seven Kagawads.

From that point on, Crispin was unstoppable and was in the forefront of every barangay activity. “Whenever someone from my barangay is hospitalized, I facilitate the payment of hospital bills. When someone dies, I help process the death certificate and make the funeral arrangements. I also involve myself with the youth and other groups.”

That probably explains why in the next two barangay elections, Crispin held on to the number one spot.

With his legislative career at the end of the three-term limit, Crispin ran and won as barangay chairman of Barangay Bajumpandan.

“As a barangay official, you only enjoy the reputation but not the pay,” he mused.

The honorarium he gets, which started at P5,000 a month until it reached P 9,000 a month on his third and last term, was not enough to support a family and his constituents.

Explaining his charity, he said: “In my mind, I feel good when I help others. It gives me a sense of fulfillment.”

Reflecting on his victory as barangay chairman, Crispin said he still couldn’t understand how he felt.

“I don’t know if I would be happy or sad, because this is a big challenge. I now head the barangay,” he said.

He said he looked forward to everyone’s cooperation as he could not do the job alone.

“While others would look at this job as a task, my hope is that I could inspire other persons with disability (PWDs) to persevere in order to excel in what they do,” he said. /atm