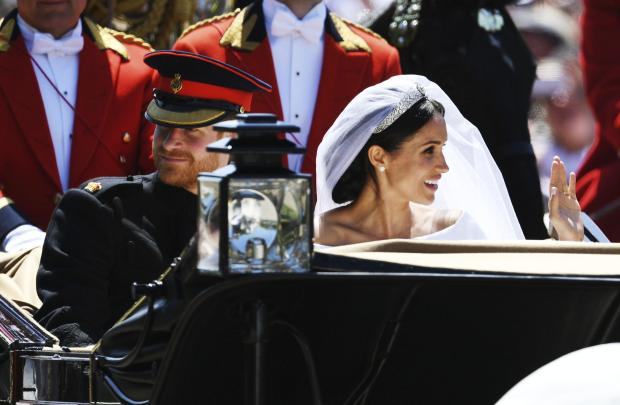 Meghan Markle reacts as she rides in a carriage with her husband Britain’s Prince Harry after their wedding ceremony at St. George’s Chapel in Windsor Castle in Windsor, near London, England, Saturday, May 19, 2018. (Pool photo by JEFF J. MITCHELL via AP)

WINDSOR, England — Prince Harry and Meghan Markle gazed into each other’s eyes and pledged their lifelong love Saturday as they married in front of hundreds of royals, celebrities and friends at St. George’s Chapel and millions of TV viewers around the world.

The pretty English town of Windsor sparkled on a warm spring day as tens of thousands of people jammed its quaint roads and parks to capture their own part of the spectacular yet elegant royal wedding extravaganza.

To kick off the festivities, Queen Elizabeth II honored her red-headed, 33-year-old grandson with a new title: the Duke of Sussex, making Markle the Duchess of Sussex.

The wedding was a global event, thanks to Harry’s status as a senior British royal and Markle’s celebrity after starring on the US television series “Suits” for seven years. Its pomp and ceremony embraced the couple’s trans-Atlantic union, mixing Anglican prayers and tradition, classical music and a gospel choir with a stately horse-drawn carriage ride through Windsor in a spectacle beamed live to tens of millions.

The American actress embraced her new British role in a sleek white silk boat-necked dress designed by British designer Clare Waight Keller. Her sheer veil — down to her waist in front and billowing for what seemed like miles behind her — carried floral references to all 53 countries in the Commonwealth, the group of countries that roughly corresponds to the former British Empire and is headed by Markle’s new grandmother-in-law, the queen.

The palace said, in addition to the Commonwealth flowers, Markle also selected two other plants on the veil: Wintersweet and, in a nod to the bride’s birthplace, the California poppy.

Harry and best man Prince William wore white gloves and the frock coat uniforms of the Blues and Royals military regiment. Harry kept his full red beard intact – a style decision that had sparked British bets before the wedding.

Markle walked down the aisle alone at first, then was accompanied by Prince Charles and 10 young page boys and bridesmaids. As his father and his bride drew close to the altar, Harry said: “Thank you, Pa.”

Markle seemed poised and confident as she delivered her vows without so much as a quiver in her voice. She smiled broadly as the Archbishop of Canterbury Justin Welby declared them husband and wife. Harry seemed a bit nervous – but happy.

The sermon offered a particularly rousing U.S. touch, with the leader of the Episcopal Church quoting civil rights leader Martin Luther King Jr. on the “redemptive power of love.” The Most Rev. Michael Bruce Curry delivered the sermon with heartfelt emotion. The musical selections also included versions of Ben. E. King’s “Stand By Me” and Etta James’ “Amen/This Little Light of Mine.”

A host of celebrities and athletes – including Oprah Winfrey, Idris Elba, Elton John, George and Amal Clooney, Serena Williams, James Corden and David and Victoria Beckham – watched from the seats in the Gothic masterpiece at Windsor Castle.

As the newest royal couple emerged from the chapel, they kissed. The crowd roared – and just kept cheering – as Harry helped his wife fold her 5 meter (16½ foot) long train into the Ascot Landau carriage as they began their procession through the streets of Windsor.

Police said more than 100,000 people lined the route. The open-topped carriage was pulled by four Windsor Grey horses and past crowds waving flags and holding cellphones aloft. The newlyweds smiled and practiced what royals must be very good at: waving and waving and waving to the crowds.

Relatives in the ceremony included 4-year-old Prince George and 3-year-old Princess Charlotte, children of William and the Duchess of Cambridge. Other relatives at the church included Charles Spencer, the brother of Harry’s late mother Princess Diana, and Harry’s cousins Zara Tindall and Princesses Beatrice and Eugenie.

Also in attendance was Harry’s sister-in-law’s family: Parents Carole and Michael Middleton, sister Pippa Middleton and brother James Middleton. Harry’s ex-girlfriend Chelsy Davy was there, as was Sarah Ferguson, the Duchess of York, the ex-wife of Harry’s uncle Prince Andrew.

Irene Bowdry, a lawyer from California, was among those who jammed the early train to Windsor. She booked her trip to England as soon as the wedding date was announced.

“An American in the royal family, isn’t that so exciting?” she said.

The weather was balmy and clear, bathing the ancient stones of Windsor Castle in a beautiful spring light.

“Windsor is absolutely bursting with excitement,” said royal historian Hugo Vickers. “There are cardboard cutouts of Meghan and Harry in every shop window.”

It is a time of transition for the British monarchy, one that seems filled with hope as William and Harry – the two sons of Charles and the late Princess Diana — step ever more confidently into the limelight.

Many in the crowd, like Ana Karukin, a Brazilian nurse living in Florida, said they came to witness a moment of history.

“We’ve got to be here for him and for her, my Meghan, my special girl, to support them, because it’s a beautiful time,” she said. “I wish that Diana was here, but she’s in heaven watching over them.”

And it seems to be a time of joy for 92-year-old queen and her 96-year-old husband, Prince Philip, who was well enough to attend. The queen was able to see her grandson marry a woman who clearly has brought him the happiness he’s often said was missing from his life after his mother’s premature death.

The family tableau played out on the broadest possible stage. Dozens of broadcasters set up on the castle grounds for a visual feast. The chapel itself is a masterpiece of the late Gothic style, and Windsor Castle has been home to British sovereigns for nearly 1,000 years.

In the afternoon at the castle, the queen was hosting the first of two receptions, one with finger foods, wine and champagne. Saturday night, a second, smaller reception for 200 people was being thrown by Charles.

Harry invited buddies from his 10 years of military service – which included tours of duty in Afghanistan – and from many of the charities he supports, which have focused on helping wounded veterans or encouraging a more open discussion of mental health issues.

In honor of Harry’s mother Diana, her older sister Jane Fellowes gave a reading during the wedding service.

But it was the crowds in Windsor that seemed to capture the joy of the moment. Many had camped or arrived at dawn for a good spot. They cheered and screamed as the newlyweds passed by.

Arlene Prinsloo had flown from South Africa – just to be in Windsor.

“I went to William and Kate’s wedding, but this is a completely different vibe,” she said. “It’s much more relaxed, and I think that reflects who Harry is.”