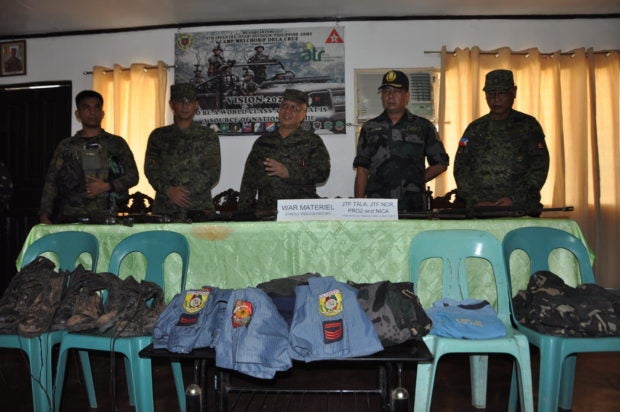 Rimando presented the seized guns and uniforms to the media on Saturday afternoon here.

But details of the NPA’s supposed plans were not revealed, except to identify the unit as the NPA Kilusang Larangang Guerilla operating in the provinces of Quirino and Nueva Vizcaya.

The military said they recovered the weapons in Sitio (subvillage) Calvo at Barangay (village) Dimasungal.

“This was the result of our active engagement with the local officials, community and tribal elders in the area. The local officials and the community are also behind the more than 70 [rebels] who surrendered to this command this 1st quarter of the year,” Rimando said.

Also in Nagtipunan on Saturday, soldiers of the Army’s 86th Infantry Battalion engaged armed men in a 5-minute gunfight after they stumbled upon an alleged rebel encampment in Sitio Pulang Lupa. No casualties were reported. VILLAMOR VISAYA JR.