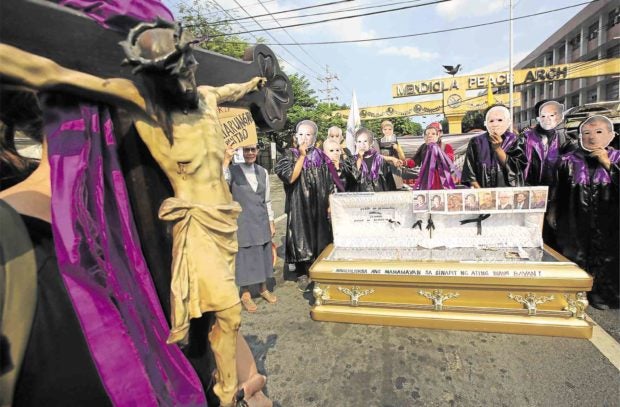 IN MOURNING Aweek after the ouster of Chief Justice Maria Lourdes Sereno, groups protesting her removal outside the constitutional impeachment process are back inMendiola, Manila, on Friday. —JOAN BONDOC

The Judicial and Bar Council (JBC) on Friday opted not to declare the country’s top judicial post vacant despite the ouster of Chief Justice Maria Lourdes Sereno last week, according to a court insider.

“The position left by the Chief Justice would only be declared open when the decision of the Supreme Court on the quo warranto case becomes final,” said the source, who asked not to be identified for lack of authority to speak with the media.

In a meeting at the Supreme Court, the seven-member body tasked by the 1987 Constitution to vet applicants and nominees for judicial positions arrived at the decision despite the high tribunal’s unprecedented ruling last week that abbreviated Sereno’s term.

In their May 11 decision, eight of the justices granted the quo warranto petition brought by Solicitor General Jose Calida against Sereno for her failure to file her statement of assets, liabilities and net worth during her nomination for top magistrate in 2012.

The high court said its ruling was “immediately executory without need of further action from the court,” although under the rules, Sereno has 15 days to file a motion for reconsideration.

According to the source, the JBC also deferred deliberations on the successor of Ombudsman Conchita Carpio Morales, who is set to retire in July after a seven-year term.

Exactly a week after Sereno’s ouster, several youth and opposition groups from Metro Manila joined forces anew in what they collectively dubbed “Black Friday” to protest the Chief Justice’s “unconstitutional” removal from office and to call for Mr. Duterte’s resignation.

“If there is anyone who should be removed from position, it is (Mr. Duterte) … in fact, it would be best for the people if his term ends as soon as possible because he has done nothing but intensify his antipeople policies without delivering concrete change,” said Raoul Manuel, convenor of Youth Act Now Against Tyranny.

Referring to the President’s recent statement about China not allowing him to be ousted, Coalition for Justice convenor Caloy Diño said: “He should be the first to feel secure in his own people if he truly is doing what he can to serve them. Instead he relies on the protection of China which has been occupying our lands and violating our sovereignty.”

Should the people move to oust the President, said Anakbayan secretary general Einstein Recides, it is a “decision of the masses in which China cannot possibly intervene.”

Lagman said the justices were liable for culpable violation of the Constitution and betrayal of public trust, as “the Constitution unequivocally mandates that it is only by impeachment instituted by the House and conviction by the Senate can an impeachable official be removed from office.”

In a separate statement, Alejano said the filing of impeachment complaints against the eight justices was “the only viable remedy to … save the integrity of the Supreme Court.” —WITH REPORTS FROM KRIXIA SUBINGSUBING, JEROME ANING, JODEE AGONCILLO, SAM ALMERO AND JOANNA DELOS SANTOS