Cohorts of the suspect worked as house help and driver of the victim
By: Dexter Cabalza - Reporter / @dexcabalzaINQ
Philippine Daily Inquirer / 05:55 AM May 19, 2018 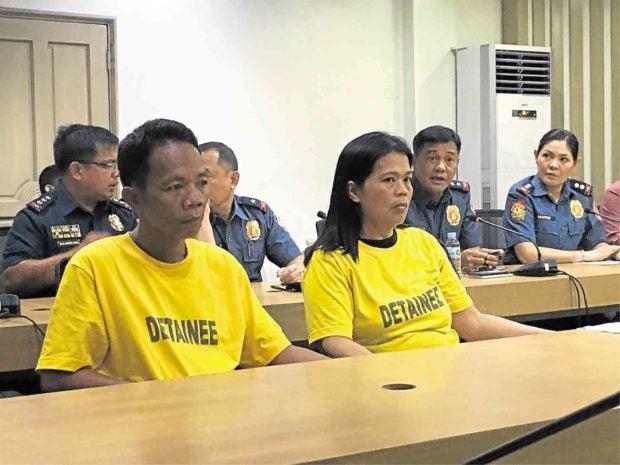 ROBBERS IN TANDEM Dindo Legario and Juvy Acero are charged with robbery with homicide for the robbery-killing of Dr. Harivelle Charmaine Hernando.

The suspect in the killing of a dean of a medical school in Las Piñas City died of a gunshot wound in the head on Friday morning after allegedly trying to grab the gun of one of his police captors.

The 38-year-old Rodel Lava still had his metal handcuffs in front of his body when he was declared dead on arrival at Las Piñas Medical Center, with a gunshot wound in his head.

Las Piñas police, however, claimed it was Lava who shot himself after he wrestled for the 9-mm pistol of PO2 Rey Esguerra.

Inside police mobile No. 4451 were the driver, identified only as PO1 Rosales and PO1 Joey Camayang in the passenger seat, while at the back was Lava, guarded on both sides by Esguerra and PO1 Romnick Camayang.

They were supposed to escort Lava to Las Piñas District Hospital for the standard medical examination, after he was arrested around 5 a.m. at Basa Compound in Barangay Zapote, according to Chief Insp. Joel Gomez, chief of Las Piñas police investigation section.

He was initially charged with illegal possession of firearms and ammunition in relation to the election gun ban, after policemen confiscated a loaded .45-caliber Norinco pistol from him.

While they were on their way to the hospital along Alabang-Zapote Road at 7 a.m., Lava  grabbed Esguerra’s firearm, said Romnick Camayang.

The two policemen and the handcuffed suspect grappled at the back, until a gunshot was fired.

“It was so fast, we really did not see who pulled the trigger,” Romnick  Camayang told a press conference at the National Capital Region Police Office (NCRPO) in Taguig City.

Upon verification, NCRPO chief, Director Camilo Cascolan, said Lava was the one who stabbed to death Dr. Harivelle Charmaine Hernando on May 11.

Hernando was the dean of the University of Perpetual Help System Dalta school of medicine. She was 62.

Found on Lava during his arrest were credit cards and identification cards belonging to Hernando and her family members.

Information on Lava’s whereabouts were given by his cohorts—Juvy Acero, 43, and Dindo Legario, 39.

They had been working for less than a month as the house help and driver of Hernando, respectively, before the doctor was killed.

Investigation showed that Acero and Legario conspired with Lava to rob and kill Hernando.

The couple said they only planned to rob Hernando, but she resisted, so Lava had to stab her.

Police said the trio attempted to open the safe deposit box of Hernando, who recently sold properties worth millions, but failed.

Legario knew Lava for a year as they had worked together in a Cavite-based bus company with Legario as a bus driver and Lava as a barker-dispatcher.

Cascolan said Lava had also records of robberies in Las Piñas and neighboring cities, and was reportedly a heavy user of illegal drugs.