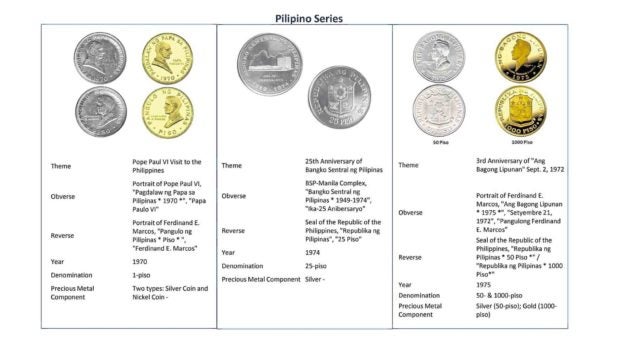 OUT OF CIRCULATION SOON These are some of the “Flora and Fauna” and “Pilipino” coin series to be demonitized.

The Bangko Sentral ng Pilipinas (BSP) announced on Friday the start of the demonetization process of several commemorative coin sets that were minted from the mid-1970s to the 1990s and urged to public to exchange these old coins for new ones.

In a statement, the central bank said the “Pilipino,” “Ang Bagong Lipunan (ABL)” and “Flora and Fauna” coin series would cease to become legal tender beyond April 30, 2019.

The decision was made during the recent meeting of the Monetary Board, BSP’ policy making body.

These commemorative coins were minted on various dates from 1974 to 1994 and were sold in sets.

The coins, either individually packed or included in sets, were however  not included in the original call for demonetization.

The central bank notified the public that the commemorative “Pilipino,” “ABL” and “Flora and Fauna” coins in sets and in individual packaging shall remain legal tender up to April 30, 2019, only.

“Thereafter, the said coins shall cease to be legal tender,” the BSP said.

From May 1, 2019, to April 30, 2020, the commemorative “Pilipino,” “ABL” and “Flora and Fauna” coins in sets and in individual packaging may be exchanged with the BSP for an amount equivalent to their face value.

Starting May 1, 2020, the commemorative “Pilipino,” “ABL” and “Flora and Fauna” coins in sets and in individual packaging shall be considered demonetized.