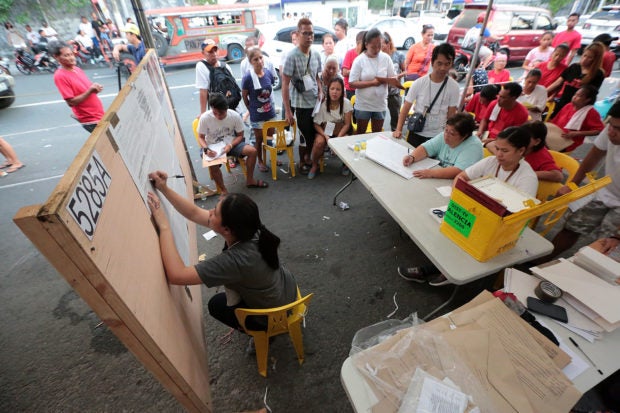 ROADSIDE TALLY Votes are counted manually at one of the roadside precincts in Monday’s barangay and Sangguniang Kabataan elections on Boni Serrano Avenue at Barangay Valencia,Quezon City. —GRIG C. MONTEGRANDE

The ruling Partido Demokratiko Pilipino-Lakas ng Bayan (PDP-Laban) will investigate its members who committed electioneering and other violations of the election law during the barangay and Sangguniang Kabataan (SK) polls on Monday.

But the party president, Senate President Aquilino Pimentel III, said the Department of the Interior and Local Government (DILG) must provide evidence against the officials.

“If the DILG gives us the evidence, [we will investigate]. We have no feedback as of now,” Pimentel told reporters on Tuesday.

Opposition lawmakers in the House of Representatives also challenged the DILG to substantiate the claim of Undersecretary Martin Diño that congressmen had engaged in vote buying.

Vote buying was rampant in the barangay and SK elections, with reports of crisp P20 to P1,000 bills changing hands in many villages across the country.

The Omnibus Election Code prohibits vote buying by candidates, with violators facing prison terms of one to six years and disqualification from holding public office.

Pimentel challenged the DILG to gather evidence and press charges against barangay chairs and 100 House members who, according to Diño, intervened in village elections by trying to influence their constituents to vote for their favored candidates.

Diño was quoted in news reports as saying his department had received reports that “some of the congressmen gave money, while others invited candidates.”

He claimed that the congressmen, as well as around 1,000 local government officials and thousands of barangay officials, resorted to vote buying to secure turfs “in preparation for the 2019 elections.”

The May 14 barangay and SK elections were supposed to be nonpartisan.

Pimentel said the DILG should take action if it had evidence. 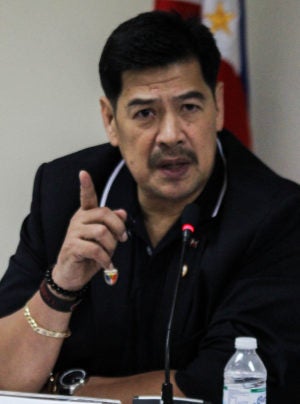 “It’s better that we make examples of these people, so that in the election next year, the same thing won’t happen again,” he said.

“Whether a party member or not, it doesn’t matter. The question is what is the evidence, whether it’s vote buying or other violations of [the] election law, in which case, cases must be filed,” said Pimentel, who will seek reelection in the 2019 midterm elections.

He noted that the distribution of sample ballots at polling precincts was a violation of election law.

“Diño should let his hands do the talking not his mouth by filing cases against those who violated election laws in the recent barangay polls,” said Akbayan Rep. Tomasito Villarin of the “Magnificent Seven” independent bloc.

A fellow bloc member, Ifugao Rep. Teddy Baguilat Jr., said he would be “fully supportive” of the DILG if it was “really serious in filing cases.”

But Baguilat called on Diño to address the concern to the PDP-Laban.

Barangay officials have “become highly politicized because of PDP-Laban’s federalism campaign,” Baguilat said, as the officials of the country’s smallest political units were made to pledge support for the administration’s push to amend the Constitution.

“It’s no wonder why many of them now approach solons and local executives asking for cash support during elections because [they] consider themselves party mates and ward leaders of the politicians,” he said.

On Tuesday, an urban poor group said election officials should stop blaming the poor in the wake of reports of rampant vote buying.

“We need to cleanse our government from corrupt politicians who are known to surely make up for their expenses when they win in elections,” said Gloria Arellano, chair of Kalipunan ng Damayang Mahihirap (Kadamay).

Kadamay said vote buying was part of patronage politics in the country. It persists because the electorate is not being provided basic services and their living standards have hardly improved, the group said.

The National Anti-Poverty Commission (NAPC) described the problem as “one symptom of a deeper social malaise.”