Many on narcolist win barangay polls 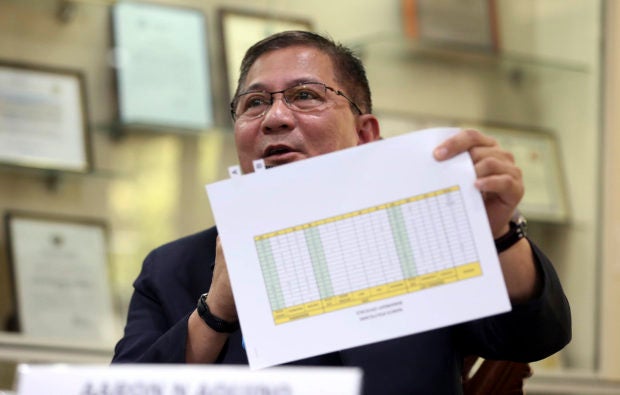 The so-called narcolist “helped a lot” in denying victory to candidates in Monday’s village polls who had been identified as involved in drugs, according to Metro Manila’s top cop.

“I believe that the community was able to evaluate and assess, and they voted wisely,” said Director Camilo Cascolan, chief of the National Capital Region Police Office.

The so-called narcolist from the Philippine Drug Enforcement Agency (PDEA) contains the names of 207 former and current village officials linked to the drug trade nationwide. It includes 12 from Metro Manila, including nine former or incumbent barangay chairs, but only one lost the elections.

Cascolan believed that the release of the narcolist contributed to the failed reelection bid of Alvin Mañalac, chair of Barangay Tinajeros in Malabon City.

Mañalac, who operates two restaurants, was the first official on the list charged by the PDEA.

He was accused of being a “coddler” of drug lords in Tinajeros where the PDEA raided a “shabu” (crystal meth) and ecstacy laboratory—just 300 meters away from the barangay hall—said to have been operated by a notorious Chinese drug cartel.

The agency said Mañalac, 41, popularly known as “Kap Daboy,” did not include the laboratory operators on his village watch list and had declared Tinajeros “drug-free.”

“Those accusations really destroyed him,” said 69-year-old Felicidad Perez, a Mañalac supporter. “The narcolist swayed the tide against him, even though we have all witnessed the good he has done for his community.”

But Cora Pascual, 58, thought it was “time for a change in leadership” in the village.

“Regardless of whether the charges against him were true, we need someone who knows what’s going on around him,” she said.

Cascolan said Mañalac’s defeat “has many implications, but I think it means our community right now is becoming more mature.”

“They have an analysis of the situation, and at the same time, they will support our antidrug campaign,” he said.

Mañalac, has not responded to the Inquirer’s requests for reactions to the PDEA list, which did not prevent many others on it from winning the polls.

It was “a sign that my village still loves me,” he said.

In Quezon City, a reelectionist barangay councilor identified as a “drug protector” topped the polls at Bagong Lipunan, a barangay right beside Camp Crame, the Philippine National Police headquarters.

Noemi Agcaoili, 53, who won her third and last term, said she was “really shocked” to learn she was on the PDEA list and had written the Quezon City police denying any drug links.

“Even if I do not become number one, I am happy to be able to prove that despite all the accusations, I know that many have continued to support me … because they know what is true,” Agcaoili told reporters before the winners were declared late on Monday.

In Baguio City, Jomarc Pabunan, who was erroneously listed as “Jumar” by the PDEA, tied with Marcial Sugot for the top spot for kagawad at Barangay Lower Magsaysay.

“The people have spoken. Their support only proves that I am not involved in illegal drugs,” Pabunan said.

Bernardo Santos, a village chief on the PDEA list, was reelected at Barangay Pulung Bulo in Angeles City.

Three reformed drug users ran for reelection, but only two won, according to the Eastern Visayas police.