Duterte on not voting: Rival bets my friends 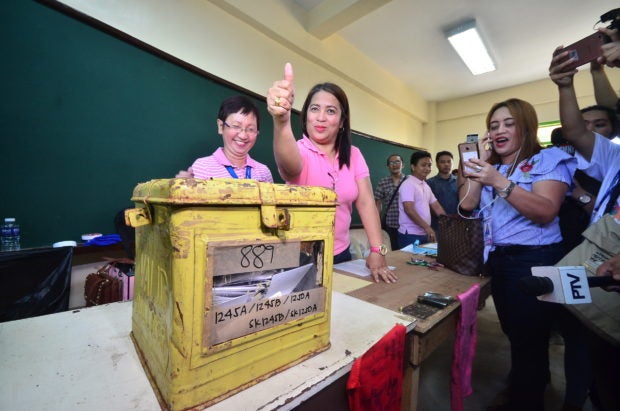 President Rodrigo Duterte abstained from voting in Monday’s village and youth council elections to “erase suspicion” by his friends, who were rival candidates, that he favored one over the other.

The President made known his reason for not voting on Monday as Malacañang on Tuesday congratulated all elected officials of villages and Sangguniang Kabataan (SK) in the wake of what presidential spokesperson Harry Roque said was “the first democratic electoral exercise under the Duterte administration.”

“We thank everyone for the full support and cooperation in ensuring that the 2018 barangay and SK elections had been relatively peaceful and orderly in all regions of the country,” Roque said in a press briefing.

On Monday night, the President told reporters that his decision to abstain from voting was for a “purely political” reason.

The President was absent at a high school in Davao City where he regularly votes during elections and which had been expecting him on Monday.

“All those who ran are my friends,” said the President, referring to rival candidates for positions in his home village.

“Almost all were my supporters during the last elections and they would never believe that I voted for them or not so I thought the better option was just skip the voting,” the President said.

He said he did not want his friends to doubt him and wanted to erase the suspicion that he was secretly favoring one friend over another.

But the President said what also kept him from voting was his busy schedule. He said he had been monitoring the elections, which pushed through after two postponements.

In a press briefing, Roque said 47 cases of violence were recorded since the election period began on April 14, but added that only seven of these were directly related to the elections.