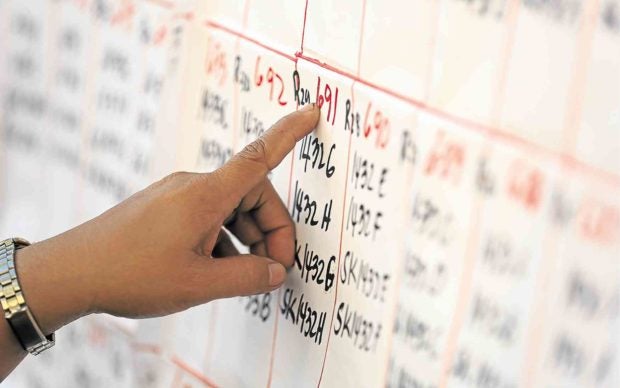 A flip of a coin has sealed the political fate of barangay and Sangguniang Kabataan (SK) candidates in several communities in Luzon, a day after voters trooped to the polls to elect their village leaders.

“The only problem we are having [that delays the proclamation] is breaking up the ties,” Icaro said in a telephone interview.

Per election rules, candidates are given five days to resolve a tie either through coin toss or drawing of lots.

This, unless the candidates decide to concede through a written notice, Icaro said.

In Batangas province, a coin toss was held on Tuesday afternoon to break a tie for SK councilor at Barangay Poblacion West in Taysan town.

Gloria Petallo, Batangas election supervisor, said several candidates also ended up with the same number of votes in the villages of San Roque in Bauan town; Balagbag in Cuenca; Catandala in Ibaan; and San Luis in Santo Tomas.

Petallo said candidates for village chiefs in more than 200 villages in the province ran unopposed.

In Cavite province, election supervisor Sheryl Moresca said winners in seven villages had yet to be proclaimed due to ties and minor glitches in the canvassing.

She said canvassing was still ongoing on Tuesday noon in Dasmariñas City because its villages were “just too big.”

A coin toss was also held to break a tie in General Mariano Alvarez town.

In Oriental Mindoro province, a coin flip broke a tie for SK chair at Barangay Camilmil.

In Nueva Ecija province, a coin toss decided the fate of Feliciano Castro and Salvador Garcia, who both garnered 343 votes for village chair of Barangay Caballero in Guimba town.

Castro won the toss on Tuesday morning, 12 hours after all ballots were counted, according to Panfilo Doctor, provincial election supervisor.

“Usually coin toss in cases of tie is done just once. But the parties can agree to do do it in a best-of-three or a best-of-five,” Castillano said. —Reports from Maricar Cinco, Madonna Virola, Armand Galang and Ador Vincent Mayol