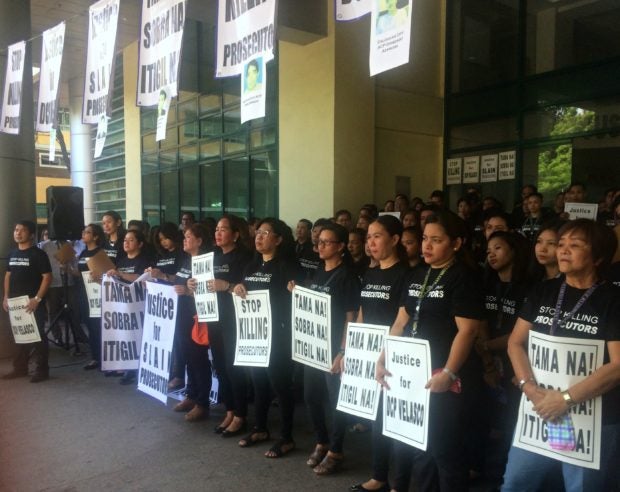 Around 100 prosecutors on Tuesday gathered at the Quezon City (QC) Hall of Justice to condemn the killing last week of a QC deputy prosecutor whom they described as kind and conscientious.

Rogelio Velasco was shot to death inside his car by at least two unidentified gunmen as he was traveling in broad daylight along Holy Spirit Drive in Quezon City on May 11. Two of his children were with him when he was killed.

“Our work is very difficult. Imagine, we send people to jail. We cannot please everybody. When you put a person behind bars, you would not know if they would harbor hatred against you. We cannot please both sides unless there is settlement,” said QC Assistant Prosecutor Nilo Peñaflor.

He noted that prosecutors like him do not have hazard pay. “We do not have bodyguards. We don’t have firearms, unless it is duly licensed. It is very hard to secure a license. These are among our misgivings. We are following the laws and yet, these criminals. It’s hard.”

Peñaflor said the slain lawyer was a good man whose credibility “was untainted with corruption,” adding that “Velasco does not deserve this kind of death.”

DOJ acting Prosecutor General Jorge Catalan Jr. said “I worked with Prosecutor Velasco when I was assigned in QC for four years. He was very kind. He did not do anything aside from working. Bahay- trabaho lang.”

“I learned he received death threats before but I didn’t expect he would be killed at this age. He was about to retire and this dreaded thing happened,” Catalan said.

Velasco was seen as the next in line as QC chief prosecutor, Catalan said, adding, “He was very kind, very hardworking. What happened to him is hurting for us.”

“Let’s continue our work as this is not for ourselves but our for country. We are mourning. My prayer is that the people and the Malacañang will be aware of our fight to stop the killings of prosecutor, judges, the DOJ staff,” Catalan said.

Velasco was the 13th prosecutor slain in the country since 1992, according to the DOJ.

He was also the second prosecutor to be killed in Quezon City after Johanne Noel Mingoa was shot dead in front of a restaurant in Baragay Old Balara in January last year. Both cases remain unsolved.Protection for lawyers

Integrated Bar of the Philippines-Quezon City chapter head lawyer Dominic Solis said they are appealing to Congress to come up with measures to protect lawyers and prosecutors.

“We are drumming up support from the Congress. We plan to meet and draft a resolution and ask the (justice committee) for (solutions) in a form of added security or other measures,” Solis said.

“The prosecution service is very important in the judicial system. We need to protect (our prosecutors),” Solis stressed, noting that he also would like to meet with President Rodrigo Duterte, a former prosecutor himself.

Solis noted that attacks on lawyers have a chilling effect on attorneys.

“Some are scared already. But we cannot do anything because this is our vocation: to represent any party whether popular or not. I hope we will respect the rule of law, and would not take the rule of law into our hands,” he said.

“I am asking the support of the police to focus on the case. This is very alarming. If (killings like this) would happen to us prosecutors, lawyers and judges, how much more to our other fellow Filipinos who are not in power? I hope the (police) will do their job. We are counting on them,” he added.

Cynthia Madamba-Luang, head of the Prosecutors’ League of the Philippines, said the group will continue pushing for the hazard pay bill and the survivorship benefits bill in the Congress.

Hazard pay refers to additional compensation for those performing hazardous or risky work. On the other hand, survivorship benefits are those granted to the surviving spouses of the employees.

“Let’s stop the killing of prosecutors. Even if they kill one prosecutor, there will still be prosecutors who will continue the fight for the abused, for the victims. We cry for justice and we call on the president with the help of Justice Secretary Guevarra. Justice for the slain prosecutors!” Madamba-Luang said. /vvp