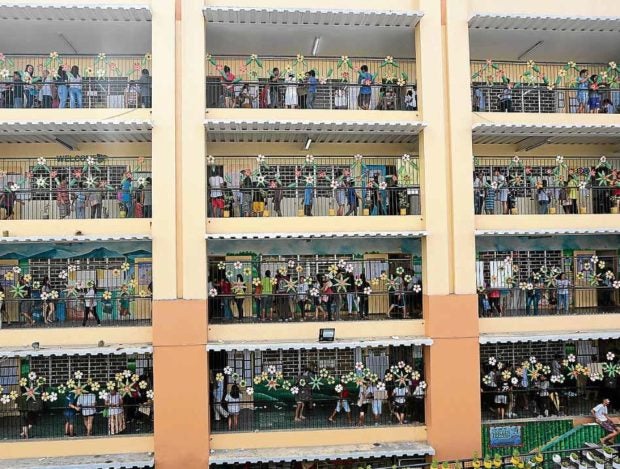 The barangay and Sangguniang Kabataan (SK) polls on Monday may be vastly different from national elections, but the same problems as with the big-time polls hounded them: vote buying, violence, names missing from voter rolls.

Acting Commission on Elections (Comelec) Chair Al Parreño, however, said that there was no failure of elections because all the 177,574 polling precincts opened and conducted balloting.

The Comelec received reports, however, that some polling precincts did not open on time.

The Comelec had projected that the elections would draw up to 75-percent voter turnout, but there were widespread reports of thin crowds at polling centers.

Parreño said the Comelec was still validating the turnout.

“Impression is good but we don’t have the number yet,” he said.

Vice President Leni Robredo, who voted in her hometown, Naga City, described the turnout as disheartening.

“I noticed that there were not many people. There was almost no queue [and] there weren’t many voters,” Robredo told reporters.

The National Citizens’ Movement for Free Elections (Namfrel) declined to issue an initial assessment, but observed that the “same old problems” marred the balloting, including names missing from the voter rolls, vote buying and vote selling.

Eric Alvia, Namfrel secretary general, said the group would release an assessment once the bulk of field reports had been collated, adding that “generally it’s been peaceful.”

Philippine National Police Director General Oscar Albayalde was at the Comelec briefing and he said election-related violence this year was down compared to the level during the 2013 barangay elections.

As of Monday afternoon, policemen on the field had not communicated “untoward incidents,” he said.

The Department of Education (DepEd) also observed that the elections were generally peaceful. 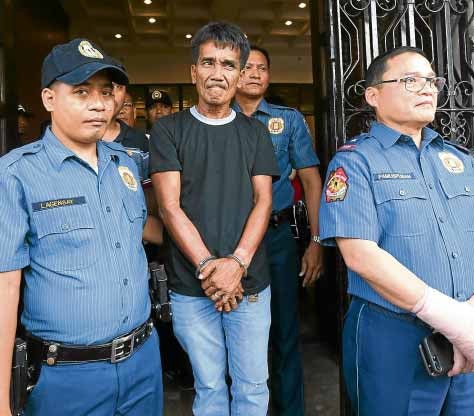 The teachers, however, still managed to serve as election volunteers, Bragado said.

Namfrel noted confusion over voter lists, as many voters had trouble finding their names on the rolls.

He said Namfrel advised voters to be patient in looking for their names on the lists, but many gave up.

“They ended up being disenfranchised and didn’t pursue it anymore,” he said.

The barangay and SK elections are nonpartisan, but many candidates reportedly behaved like members of political parties: They tried to influence the results of the balloting using their money.

A suspected vote buyer in Aklan was reportedly caught in the act of distributing envelopes containing cash and sample ballots on the eve of the elections, according to Comelec spokesperson James Jimenez.

He said authorities caught the suspect “in flagrante delicto.”

Jimenez, however, did not disclose the identity of the alleged vote buyer nor the candidate the suspect supported.

Apart from the arrest in Aklan, Jimenez said multiple reports of vote buying were also recorded across the country. The Comelec, he said, was still verifying the reports.

Albayalde said reports of vote buying came from many places, including Taguig City, Calauag and Lucena in Quezon, and Calamba in Laguna.

Despite Comelec warnings against campaigning on election day, campaign materials were distributed at polling places on Monday.

At Heneral Pio del Pilar Elementary School in Makati City, for instance, flyers and sample ballots carrying the name of a candidate littered the halls on the ground floor, just steps away from the polling precincts.

Jimenez said giving away sample ballots was considered campaigning, hence a violation of the election law.

Albayalde reported that more than a thousand policemen served as election tellers.

Areas that required the PNP to take over electoral boards were in Sulu, Basilan, Maguindanao, Lanao del Sur, Cotabato City and North Cotabato.

Under Comelec Resolution No. 10330, uniformed police officers may be deputized as Board of Election Teller members if prevailing circumstances require it. 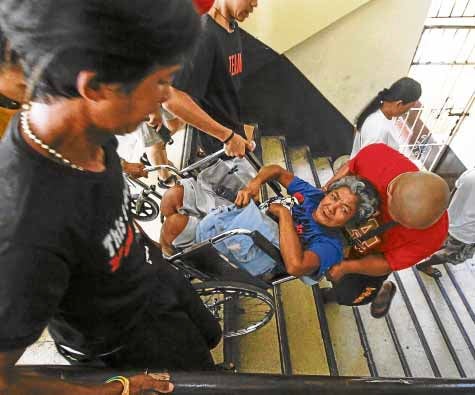 SENIOR VOTER A senior citizen is carried to her precinct in a wheelchair on the upper floor of Ramon Magsaysay High School building on España Avenue in Manila. —EARVIN PERIAS

Such circumstances, the Comelec said, include threats to peace and order and that there are no other qualified, willing and available people to render election service in the affected areas.

Guanzon cited a report from Bacolod City where children below 10 years were allegedly used to distribute campaign leaflets inside polling premises.

“This is one tactic of candidates that they think they can get away with. We have those leaflets and in my opinion the names that appear on those leaflets are liable under our election law,” she said.

“Complaints should be filed against them by any person, by any citizen or motu proprio by our election officer,” she added.

Guanzon also said that there were reports of intimidation, including use of threats to force candidates to withdraw their candidacies. —With reports from Julie M. Aurelio, Matthew Reysio-Cruz, Jhesset O. Enano, Jovic Yee and Rey Anthony Ostria