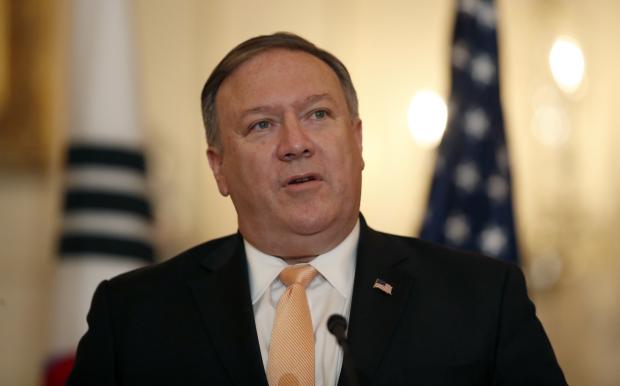 Secretary of State Mike Pompeo speaks during a media availability with South Korean Foreign Minister Kang Kyung-wha at the State Department, Friday, May 11, 2018 in Washington. (Photo by ALEX BRANDON / AP)

WASHINGTON — The United States is offering assurances to North Korea’s Kim Jong Un as it seeks to put in motion the potential for a sweeping nuclear deal ahead of President Donald Trump’s upcoming summit with the North Korean leader.

Secretary of State Mike Pompeo said the US will need to “provide security assurances” to Kim if they’re able to forge an agreement. Pompeo met with Kim last week in North Korea, helping set the stage for Trump’s historic meeting with Kim in Singapore on June 12.

Trump has set an ambitious goal for North Korea to get rid of its nuclear weapons in a permanent and verifiable way. In return, the US is willing to help the impoverished nation strengthen its economy.

Pompeo was asked on “Fox News Sunday” whether the US was in effect telling Kim he could stay in power if he met the US demands. Pompeo said: “We will have to provide security assurances, to be sure.”

The top US diplomat did not elaborate, but his comment could refer to the type of assurances North Korea has sought in the past.

A statement issued during international negotiations with North Korea in 2005 over its nuclear weapons development said the “United States affirmed that it has no nuclear weapons on the Korean Peninsula and has no intention to attack or invade (North Korea) with nuclear or conventional weapons.”

The North has said it needs nuclear weapons to counter what it believes is a U.S. effort to strangle its economy and overthrow the Kim government.

“Make no mistake about it, America’s interest here is preventing the risk that North Korea will launch a nuclear weapon into L.A. or Denver or to the very place we’re sitting here this morning,” Pompeo said from Washington. “That’s our objective, that’s the end state the president has laid out and that’s the mission that he sent me on this past week, to put us on the trajectory to go achieve that.”

Pressed in a separate interview on whether the US would seek regime change, Pompeo said “only time will tell how these negotiations will proceed.”

North Korea said Saturday that all of the tunnels at the country’s northeastern nuclear test site will be destroyed by explosion in less than two weeks, ahead of Kim’s summit with Trump. Observation and research facilities and ground-based guard units will also be removed, the North said. Pompeo praised it as “one step along the way.”

John Bolton, the president’s national security adviser, described the types of steps that North Korea would need to take as part of a denuclearization process, including the potential involvement of a processing center in Tennessee.

“The implementation of the decision means getting rid of all the nuclear weapons, dismantling them, taking them to Oak Ridge, Tennessee,” Bolton said in an interview with ABC’s “This Week.” “It means getting rid of the uranium enrichment and plutonium reprocessing capabilities,” adding the process would also need to address North Korea’s ballistic missiles.

“I don’t think anybody believes you’re going to sign the complete ending of the nuclear program in one day. But we are also very much interested in operationalizing the commitment as quickly as possible,” Bolton said.

Bolton said in an interview with CNN’s “State of the Union” that North Korea should not “look for economic aid from us. I think what the prospect for North Korea is to become a normal nation, to behave and interact with the rest of the world the way South Korea does.”

“The prospect for North Korea is unbelievably strong if they’ll commit to denuclearization. That’s what the president is going to say,” he said.

Pompeo said private-sector Americans could help rebuild North Korea’s energy grid and develop the country’s infrastructure. He described the possibility of American agriculture being used to “support North Korea so they can eat meat and have healthy lives.”

South Korea has said Kim has shown an interest in dealing away his nuclear weapons in return for economic benefits. But it remains unclear if Kim would ever fully relinquish the weapons he probably views as his only guarantee of survival.