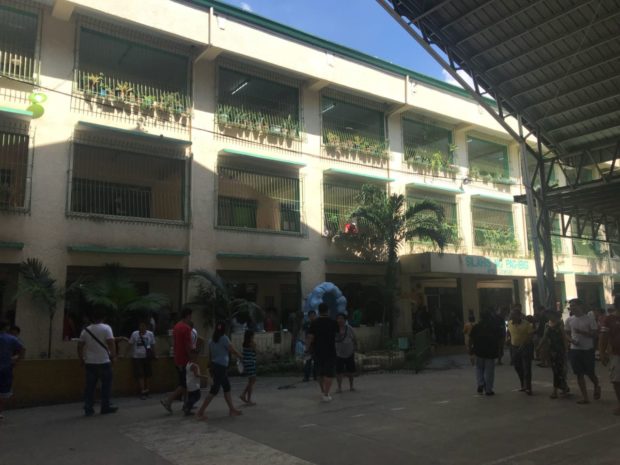 Luis Gonzales, a person with disability, had to go up to the third floor of this school building of the P. Burgos Elementary School in Manila to be able to vote. INQUIRER.NET / FAYE ORELLANA

For some persons with disability (PWDs) and elderly voters at P. Burgos Elementary School in Manila, casting their vote for the 2018 Barangay and Sangguniang Kabataan Elections proved to be a struggle on Monday.

Their struggle was in getting to their assigned precincts.

Luis Gonzales, of Sampaloc, Manila, told INQUIRER.net that his precinct number was 371 — a room located on the third floor of the SPED building.

According to him, he was hoping to see some Commission on Election (Comelec) officials in order to request to just vote on the ground floor.

Despite Gonzales’ condition, he said that one of the qualities of the Barangay candidate is to change the system in his barangay.

As for the case of Zenaida Piscos, going up to the third floor was not a problem.

For Piscos, 79, her only concern was that she wanted to be sure of her precinct number before climbing up to the third floor.

She also said that voting in the barangay elections was important to ensure that the publics’ needs were addressed.

Just like Gonzales, Piscos was looking forward to having barangay officials who would show concern for residents and work for positive change in their communities.

She said she also wanted someone who could correct the wrong things in her barangay, like minors who roam the streets after 10 p.m.

In an earlier interview, Comelec spokesperson James Jimenez said that PWDs and senior citizens would have priority lane access during the elections.

Poll watchers assisted the elderly and people with special needs to go their assigned rooms.

A poll watcher who did not want to be named said that officials were ready to assist those who needed help.