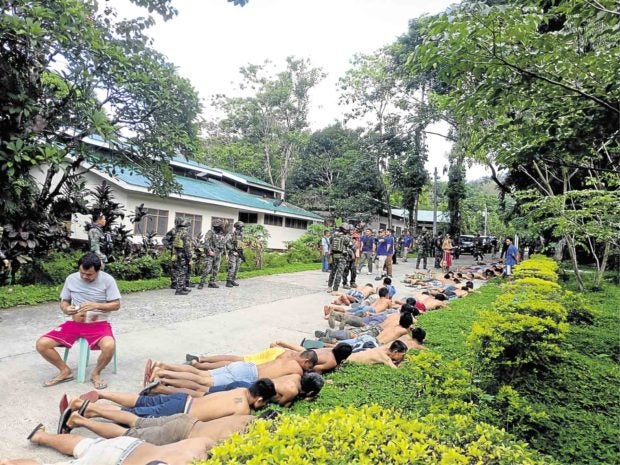 DAVAO CITY — Police on a mission to inspect the Zamboanga del Sur provincial jail in Pagadian City on Saturday found prisoners outside their cells carrying firearms, triggering calls for an investigation and raising suspicion that the inmates were being used for a private army.

Senior Supt. John Guyguyon, Zamboanga del Sur police director, told the Inquirer by phone that police found that prisoners were being allowed to carry firearms inside the jail, while some of the inmates were found in another facility near the quarters of Gov. Antonio Cerilles in the village of Dao in Pagadian.

“We have recovered 69 prisoners in Dao alone,” Guyguyon said.

In the main jail, he said inspectors were also surprised to find that some inmates, including those already convicted of different crimes, were allowed to roam outside maximum security.

“They were supposed to be inside but they were outside,” Guyguyon added.

He said inspectors were also puzzled by the discovery of prisoners carrying guns.

“Their firearms were more powerful” than those carried by jail guards, Guyguyon added.

He said several firearms had been recovered. Among them were an Israeli-made Tavor rifle, AK-47 assault rifles, shotguns and .45-caliber pistols.

The inspection, led by the Criminal Investigation and Detection Group in Western Mindanao, was conducted amid reports that inmates were being allowed to go out of the provincial jail.

A memorandum signed by Chief Supt. Ferjen Torred, Western Mindanao Regional Intelligence Division head, said the inspection was also aimed at checking the alleged proliferation of drugs in the jail.

The inspection was also supposed to cover other jails in three Zamboanga provinces.

Cerilles, in a press conference on Saturday shortly after the police checked the provincial jail, said the inspection was part of the “usual job of those in authority to monitor and inspect government lockup facilities.”

But he protested reports that prisoners were allowed to leave the facility.

“They thought that we have allowed prisoners to go out of jail,” he said.

Cerilles defended the discovery of prisoners in a facility near his quarters in Dao, saying it was an extension of the provincial jail.

He said it was approved by the provincial board, through Resolution No. 2016-1133, which addressed congestion in the main jail.

Yu, in a phone interview, told the Inquirer that she would file a bill demanding the investigation as soon as Congress resumed session next week.

Yu said the discovery was alarming.

Guyguyon said police were also investigating who could be responsible for the release and arming of prisoners.

Yu, citing inspection reports, said the inmates were not being guarded.

“They were provided firearms,” said the legislator. “It is not good if they were being utilized as a private army,” she said.

Yu said her political rivalry with Cerilles should not be used to block the investigation.

She said should Congress heed her demand for a probe, she would stay out of it.

Rep. Aurora Cerilles, the governor’s wife, was expected to be at the investigation and explain what happened, Yu said.

She said based on results of the inspection, it was “already an established fact” that prisoners were free to roam outside the jail.

“We could find out if this was isolated or being practiced in other jails,” Yu said.

The probe, she said, could lead to legislation that would determine if provincial jails should remain under the control of local officials or be under national government agencies. —Allan Nawal