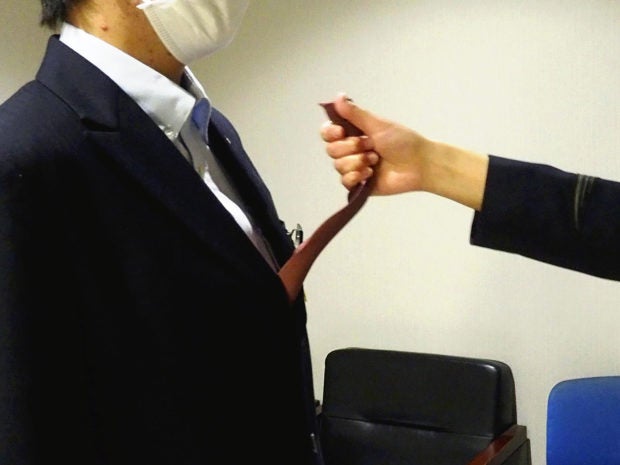 TOKYO — Cases of passengers violently attacking station attendants and train staff continue to occur with alarming regularity. According to the Land, Infrastructure, Transport and Tourism Ministry, 825 cases of such violence were reported in fiscal 2016, exceeding 800 for the fourth straight year.

In some instances, railway workers felt the need to keep silent about an attack, for fear reporting it would disrupt train schedules. Railway companies continue to struggle with how to cope with the problem.

On the night of Feb. 20, 2017, a man in his 60s who had just exited a train car suddenly shouted, “Don’t be an idiot!” and punched a station worker in his temple on the platform of an inbound line of Tokyu Corp. in Nagatsuta Station in Yokohama.

Police officers rushed to the site and pulled the passenger away, but the station worker, who was in his 20s, suffered an injury that took three days to heal. The passenger was apparently angry because trains were delayed due to an accident. According to people involved, the attacker was drunk at the time of the incident.

In response to the growing problem of passenger violence, the transport ministry began asking about 200 railway companies to report incidents of violence against workers, starting in fiscal 2013.

The number of reported cases has fallen from the 887 in fiscal 2014 albeit essentially unchanged.

Of the 825 cases in fiscal 2016, most occurred in big cities, including 264 in Tokyo, 95 in Kanagawa Prefecture and 65 in Osaka Prefecture. At least 504 of the cases, or 61 percent, involved passengers who were drunk.

“If we stop trains to report such incidents, we’re afraid it will inconvenience hundreds of thousands of passengers,” a railway company official said. “If the harm is slight or such incidents occur during rush hour, our workers sometimes keep silent.” The number of such cases is thus assumed to be much larger in reality. 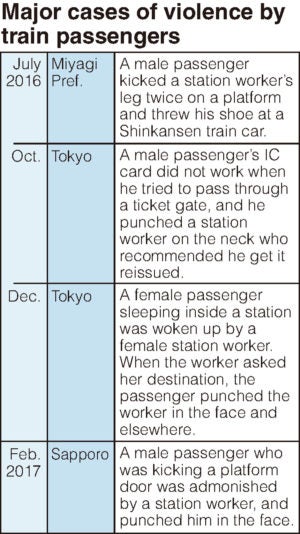 Railway companies have taken measures to prevent delayed trains and other issues as a result of such incidents.

Tokyu has its station workers wear ties that are easily unhooked, in anticipation of a passenger grabbing their chest. The ties have simple structures and simply hook to the collar of a shirt. If another person pulls the tie, it immediately comes unhooked.

“It’s easy for a drunk passenger to grab a station worker’s chest,” a Tokyu official in charge of the issue said. “If station workers are grabbed that way, it may delay their response, such as summoning help.”

Tokyo Metro Co. has emergency notification buttons at counters next to ticket gates in some of its subway stations, buttons that can be used to notify station offices when incidents occur. This way, other station staff can be summoned to help when a station worker has trouble with a passenger. Tokyo Metro said it plans to increase the number of places where the buttons are installed.

West Japan Railway Co. (JR West) has compiled a manual about how to deal with drunk passengers, copies of which are distributed to station workers. The manual says, for example, “If a passenger is sleeping, speak quietly so as not to startle them” and “Don’t stand right in front of a problematic passenger.”

However, there are no sure-fire measures, and the reality is that railway companies can only rely on improvements in passengers’ manners.

Hajime Tozaki, a research professor of Tokyo Metropolitan University who is an expert of transport policies, said: “Taxi companies have recently emphasized to the public how harmful violent passengers are through such measures as publicly releasing videos of such passengers. Railway companies must also resolutely take action by, for example, immediately reporting incidents to police or releasing footage from security cameras.”