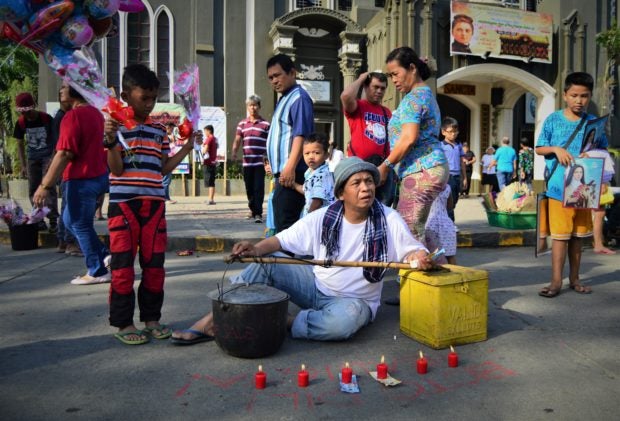 CAGAYAN DE ORO CITY – A day before the May 14 village and youth polls, a local artist here has urged people not to sell their votes through performance art.

With a blackened cooking pot and a replica of a ballot box as his main props, Nicolas Aca, 48, performed outside the St. Augustine Metropolitan Cathedral on Sunday morning.

Written in red chalk on the black pot was “my vote is not for sale,” the message that Aca has been trying to impress on the city’s voters for the past four elections.

Aca, the resident artist and art gallery curator at Capitol University’s Museum of Three Cultures, calls his performance “Boto, Goto,” which sums up many of  Filipinos’ attitude during elections, including the penchant to vote for moneyed candidates.

“You can buy goto from the few pesos that you receive from politicians during the election season. Sure, it will fill your stomach for a day. You’re contented, but what’s next? Is your vote just good enough to buy goto?” he said.

Through his art, Aca wants to stir people’s conscience and make them think twice before accepting money from candidates seeking elected posts.

“This is my contribution to the efforts to have a clean and honest election,” Aca said, after his two-hour performance.

While he acknowledged that vote-buying and vote-selling have become the norm in any election in the country, Aca said he still wants people to know that there are still individuals like him who wants to change the system.

“People nowadays wait for the ‘ulan-ulan’ on the eve of the election day. I think this attitude will not change overnight, but at least I am doing my part to let them know that it’s not the right way,” he said.

“Ulan-ulan” (drizzle) is the act of giving money by political candidates to voters the day before the election.

While a few church goers took notice of his performance and were seen nodding, which probably meant they got his message, most people just ignored him.

“It’s expected. Many will take my performance for granted. There were even others who ridiculed me,” Aca said, adding that one of the cathedral’s resident priests even asked him to leave the premises as he was causing traffic congestion.

“I didn’t argue with the priest. I figured that the priest will always win over the artist in that situation. But it cut short my performance and the message I was trying to convey was lost,” he added.

Aside from his performances, Aca also paints and does mixed media and installation artworks. /ee