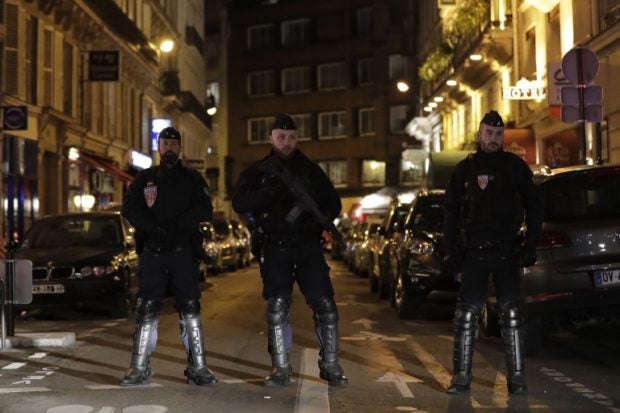 Policemen stand guard in Paris center after one person was killed and several injured in a knife attack in Paris on May 12, 2018. The assailant was killed by police. AFP

PARIS, France — A knifeman shouting “Allahu akbar” was shot dead by police in central Paris late Saturday after he killed one person and injured four, prompting a terror probe.

The attack took place near the city’s main opera house in an area full of bars, restaurants and theaters which were brimming on a weekend night.

The Islamic State (ISIS) group has claimed responsibility for a deadly knife attack carried out in central Paris late Saturday, according to the SITE monitoring group.

“The executor of the stabbing operation in the city of Paris is a soldier of the Islamic State and the operation was carried out in response to the calls to target the coalition states,” a “security source” told ISIS’s official Amaq news agency in an Arabic-language report.

Prosecutors cited witnesses as saying the man shouted Allahu akbar as he went on the rampage, and added that a terror investigation had been launched.

The man attacked five people with a knife, one of whom died, police said. Two were in serious condition and all the victims are in hospital.

Interior Minister Gerard Collomb hailed in a tweet the “sang-froid and reaction of the police who neutralized the attacker.”

A large area was cordoned-off where police, fire and rescue vehicles converged.

Shocked tourists and residents looked on from behind the security perimeter.

“I was on the cafe terrace, I heard three, four shots, it happened very fast,” said 47-year-old Gloria.

“Then the bartenders told us to come inside very quickly. Then I went out to see what was going on, and then I saw a man on the ground,” she added.

The attack comes as France is under a constant threat from terrorism. A string of jihadist attacks has claimed the lives of over 245 people around France in the past three years. /cbb