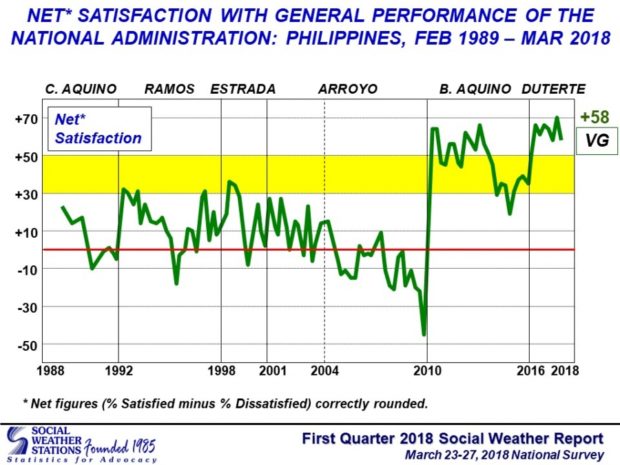 The Duterte administration’s net satisfaction rating dropped 12 points to +58 in the latest survey of the Social Weather Stations (SWS).

According to the SWS, the 12-point decrease can be attributed to the significant drops in ratings within Balance Luzon (17 points), Metro Manila (13 points), and Mindanao (15 points).  The Duterte administration’s rating in Visayas stayed at +57.

The survey, which was conducted from March 23 to 27, translates to 69 percent of Filipinos being satisfied with the administration’s performance, while 11 percent were dissatisfied, and 18 percent were neither satisfied nor dissatisfied.

SWS interviewed 1,200 respondents for the survey, with 300 individuals for each of Metro Manila, Balance Luzon, Visayas, and Mindanao.  It had sampling error margins of ±3% for national percentages, and ±6% for each locality.

It was moderate on hunger prevention (+22) and neutral in fighting inflation (+6), the survey noted.

Even if the net satisfaction ratings of the administration among social classes went down, it is still at “very good” +56 within Classes A, B, and C, at +58 with Class D, and at +54 with Class E.

College graduates are also content with the administration’s policies and plans, with a +72 rating.  However, the Duterte administration’s grade drops by 12 points among elementary graduates, from +68 in December 2017 to +56 in March 2017.  /kga