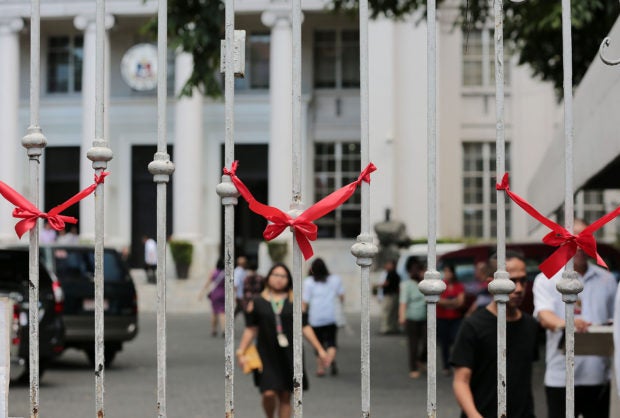 A day before the justices decide the fate of Maria Lourdes Sereno, Supreme Court employees on Thursday stood pat on their demand that the Chief Justice go, showing their anger by tying red ribbons to the gate of the high court’s compound in Manila.

But former President Benigno Aquino III expressed hope that the Supreme Court justices would examine their conscience before voting on a petition challenging the validity of his appointment of Sereno as Chief Justice six years ago.

The justices are scheduled to sit in a special full-court session on Friday to deliberate on the quo warranto petition brought against Sereno by Solicitor General Jose Calida, which if granted by the magistrates will short-circuit an impeachment bid Sereno is facing in the House of Representatives.

The 1987 Constitution prescribes impeachment as the sole process for removing constitutional officers from office.

Sereno, who returned to work on Wednesday after a two-month leave, will preside over the special session, but will withdraw when the deliberations turn to Calida’s petition.

Likely to be ousted

Court insiders have told the Inquirer that at least eight of the justices will vote to unseat Sereno.

One of the sources, however, said the vote against the first female Chief Justice of the Philippines could reach 11.

Five of the justices—Teresita Leonardo-de Castro, Diosdado Peralta, Lucas Bersamin, Francis Jardeleza and Noel Tijam—testified against Sereno in the impeachment hearings in the House.

Sereno had asked the five to inhibit themselves from the deliberations on Calida’s petition but they refused.

“Before [they cross the Rubicon], we hope and pray that they will examine themselves,” Aquino told the Inquirer by phone.

“They may have personal or professional reasons against the sitting Chief Justice. But I remember what my father used to say: ‘The true test of democracy is your ability to defend the rights even of your enemies,’” he said.

Aquino appointed Sereno to the top post in the judiciary in 2012 although she had served on the Supreme Court for only two years at the time as part of his campaign for judicial reform.

Sereno was never popular among the justices and even among the Supreme Court employees, who set the gate to the high tribunal’s compound in Manila ablaze with red ribbons on Thursday.

The Supreme Court Employees Association (SCEA) also urged its members to wear red on Friday as a symbol of the group’s opposition to Sereno.

SCEA members have been joined by judges and employees of lower courts in the weekly flag-raising ceremony in the Supreme Court compound on Padre Faura Street, also wearing red and calling on Sereno to step down.

“Let’s turn the Supreme Court and Padre Faura red on Friday. Let’s show our unity against lies and attacks against the integrity of our beloved institution, the Supreme Court,” SCEA said in a statement.