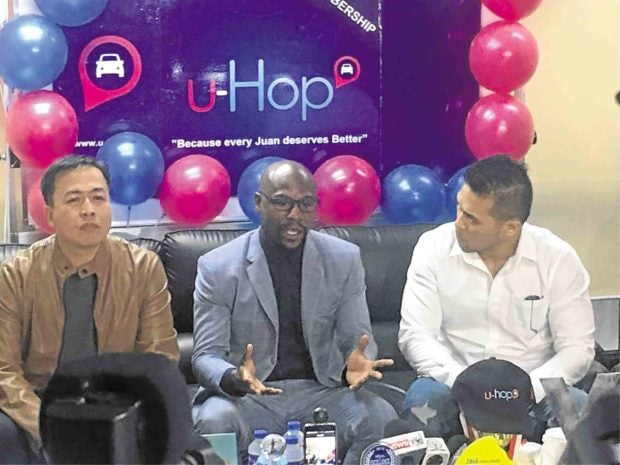 Its announcement follows the recent entry of five new TNCs to compete against Grab, which now dominates the country’s ride-hailing industry following its acquisition of Uber’s Southeast Asia operations.

Currently, u-Hop has 10,000 drivers on its portfolio—making it the second largest TNC after Grab—but only 1,000 are active, u-Hop Chair Marvin dela Cruz said in a press conference.

Jayjay Viray, u-Hop vice president for special projects, told the Inquirer that they terminated their TNVS operations in 2016 after the Land Transportation Franchising and Regulatory Board (LTFRB) imposed a moratorium on TNVS applications pending a review of policies covering the system.

Its other services like its business-to-business shuttle and air services, however, continued.

Viray said u-Hop was encouraged to resume its TNVS operations when it saw “the demand for more cars for the public.”

U-Hop also announced its partnership with boxing champion Floyd Mayweather Jr. who said he had been monitoring the TNC’s business growth for the past three years.

“I’ve been watching this company since it started three years ago and I’m telling you, [the company] has been going strong. Soon this company could be worldwide, surpassing] Uber and other companies … it could be No. 1,” Mayweather added.

The boxing champ, who was also at the press conference, said he first got interested in investing in u-Hop because his personal assistant was from the Philippines. He urged people to patronize and download the u-Hop app.

Though Dela Cruz declined to give more details about Mayweather’s involvement in the company’s operations, he said the boxing champ could help introduce the firm abroad as u-Hop sets its eyes on a US expansion in July.