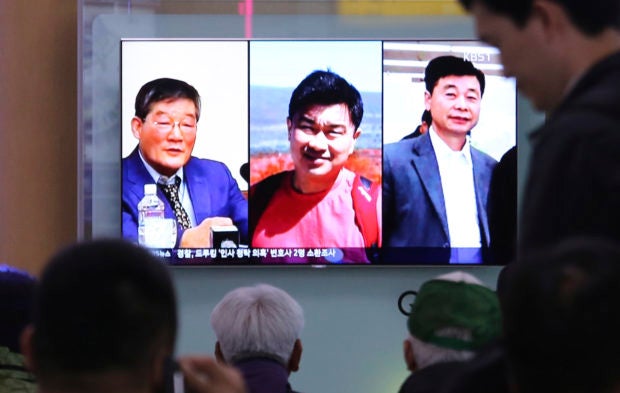 In this May 3, 2018 photo, people watch a TV news report on screen, showing portraits of three Americans, Kim Dong Chul, left, Tony Kim and Kim Hak Song, right, detained in the North Korea, at the Seoul Railway Station in Seoul, South Korea. President Donald Trump says Secretary of State Mike Pompeo is on his way back from North Korea with three American detainees, saying they “seem to be in good health.” AP

United States President Donald Trump will greet three Americans released by North Korea at an airbase near Washington on Thursday, underscoring a much needed diplomatic win and a stepping stone to a historic summit with North Korean leader Kim Jong Un.

Trump will make the short helicopter ride from the White House to Joint Base Andrews to meet Kim Hak-song, Tony Kim, and Kim Dong-chul in person, after their release on from North Korea on Wednesday.

The North Korean regime granted the three men “amnesty,” a US official said, removing a major point of friction between Washington and Pyongyang and a potential obstacle to talks between the Cold War foes.

“I am pleased to inform you that Secretary of State Mike Pompeo is in the air and on his way back from North Korea with the 3 wonderful gentlemen that everyone is looking so forward to meeting. They seem to be in good health,” Trump tweeted.

Two of the men – agricultural expert Kim Hak-song, and former professor Tony Kim –were arrested in 2017 while Kim Dong-chul, a South Korea-born American businessman, and pastor in his 60s, was sentenced to 10 years of hard labor in 2016.

The White House said all three men were able to walk unassisted onto a US Air Force plane that carried them and the secretary of state out of North Korea.

A second plane, with more robust medical equipment, awaited them at Yokota Air Force Base, just outside Tokyo and will bring them back to the US.

“All indications are at this point that their health is as good as could be given that they’ve been held,” Pompeo told reporters traveling with him.

The trio later released a statement of thanks conveyed via the State Department.

“We thank God and all our families and friends who prayed for us and for our return. God Bless America, the greatest nation in the world,” they added.

The family of Tony Kim also voiced gratitude to “all of those who have worked toward and contributed to his return home” – and specifically thanking Trump for “engaging directly with North Korea.”

Trump described the men’s release as “a gesture of good will” and said he would be on-hand when Pompeo’s three “guests” land shortly after 2:00 a.m. (0600 GMT) Thursday.

Trump aides declared the release of the three prisoners as an unbridled political victory as well as evidence that “strong leadership and our America First policies are paying dividends,” Vice President Mike Pence said.

The development appears to pave the way for a much-anticipated summit between Trump and Kim likely scheduled to take place within weeks.

“It was absolutely imperative that the Trump Administration secure the release of the three Americans well before any summit,” said Jean Lee, an analyst at the Wilson Center.

In his first reported comments on the summit, Kim said his sit down with Trump “would be a historic meeting” and an “excellent first step,” according to state media.

Trump said a time, date, and location have been decided for his historic meeting with Kim although US officials said there is still some fine-tuning to be done.

The most likely location appears to be neutral Singapore.

Trump told reporters the administration would announce the details “within three days” but revealed it would not be at the Demilitarized Zone that separates North and South Korea.

“I think that Chairman Kim is trying to set good conditions for the summit. I think we are having good conversations, productive conversations,” Pompeo said.

“We’re planning on it will be a single day, but in the event that there is more to discuss, there’ll be an opportunity for it to extend into the second day as well,” he also said.

The meeting will discuss North Korea’s nuclear and ballistic weapons program, which may soon give Pyongyang the capability of striking the continental US.

Trump has demanded that North Korea give up its nukes while Kim has offered few indications of what he is willing to concede or what he will demand in return.

North Korea has often insisted that the US withdraw support for South Korea, where 30,000-plus US military personnel are stationed.

Since coming to office Trump has embarked on a campaign of “maximum pressure” on the North Korean regime.

A series of provocative North Korean missile tests have been met with US sanctions and a tougher Chinese stance on cross-border trade.

Officials in Washington believe the punitive economic measures have prompted fuel shortages in North Korea and increased tension inside the regime.

North Korea official Kim Yong Chul, who met Pompeo in Pyongyang, insisted the country’s openness to talks was “not the result of sanctions that have been imposed from outside” but a change in regime focus.

“We have perfected our nuclear capability. It is our policy to concentrate all efforts into economic progress in the country,” Kim Yong Chul said.                     /kga