16-year-old boy taken by armed men in Muntinlupa City on April 23 yet to come home after 3 companions found dead
By: Dexter Cabalza - Reporter / @dexcabalzaINQ
Philippine Daily Inquirer / 06:50 AM May 10, 2018 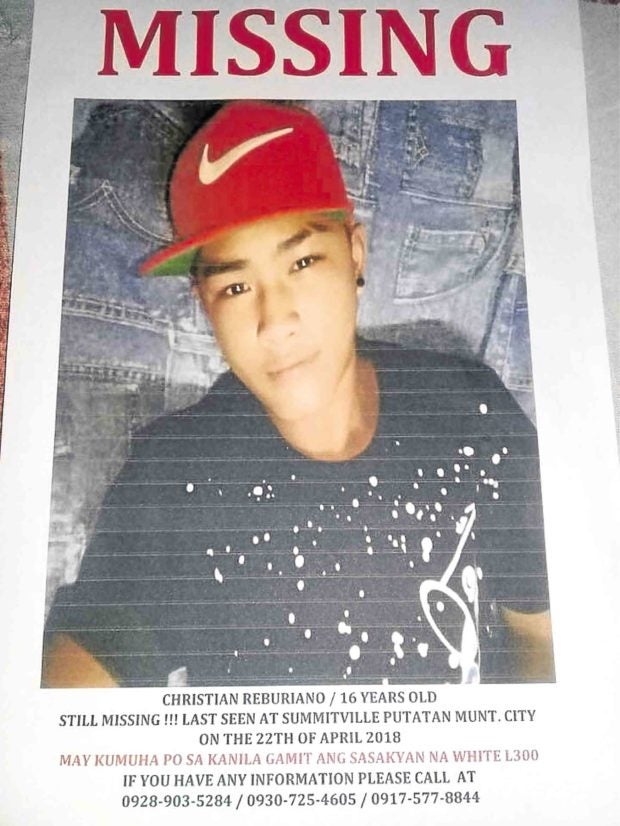 More than two weeks have passed, but Ding Ricarto is still praying for the safe return of her 16-year-old son.

Christian “Totoy” Reburiano, was forced into a van shortly past midnight on April 23. He was taken with his friends: Albert Abalos, 29; Joshua Anzures, 23 and Jayson Santos, 25.

The group were on their way home after a drinking spree at Summitville in Barangay Putatan, Muntinlupa City, when a white Mitsubishi L300 van stopped near them.

Witnesses said five armed men got out, introduced themselves as police officers and herded the group into the van.

“We became worried when Totoy and his friends did not return after a day,” Ricarto said.

“We were so exhausted. We  went to all the police stations we could go to here in Metro Manila and the Calabarzon area. But we still didn’t find them,” she added.

The bodies of Reburiano’s companions later turned up. Santos was found on April 27 in Apalit, Pampanga while Abalos was discovered on April 28 in San Jose, Nueva Ecija. Anzures’ body was the last to be found on May 2 in Lingayen, Pangasinan.

Chief Insp. Gideon Ines Jr., chief of the Muntinlupa police’s investigation section, said that the bodies were riddled with bullets, the victims’ faces were covered in packing tape while their hands were tied.

Found on each body was a piece of paper that claimed the victim was either a drug pusher, a drug courier or a car thief.

Ines said their investigation showed that Santos, Anzures and Abalos were involved in illegal drugs and car theft activities.

Anzures was arrested in December 2016 for possession of crystal meth or “shabu” although he was released after posting bail, Ines added.

He denied that Muntinlupa policemen were the ones who took the victims, saying it was possible the abductors were “rogue policemen or military men, or even members of an organized crime group.”

Reburiano’s parents, however, insisted that their son was not involved in any of his companion’s illegal activities.

“He didn’t have any vices. He’s just a kid who enjoys playing basketball and tending chickens,” Ricarto said.

It was his love for chickens that drew him to Abalos who raised gamecocks, she added.

But citing intelligence reports, Ines said Abalos’ group used the teenager as their drug runner without his family’s knowledge.

The families of the slain men also denied that their relatives were involved in anything illegal. However, they told the Inquirer that they would not “chase that elusive justice and just let God do his work.”

“We won’t be filing cases against his killers. We don’t even know who they are,” one of them said. “We just want peace and quiet. We are afraid that they will get back at us if we do something.”

The incident has affected the atmosphere at Summitville village, a busy community. “There used to be a lot of people outside the streets until the wee hours of the morning. But after what happened, everyone just stays inside their houses.”

Ricarto admitted that she was also afraid “but I could not just leave my son alone.”

She appealed to her son’s captors: “Please return Totoy to us. He has done nothing wrong to you. Please spare him.”