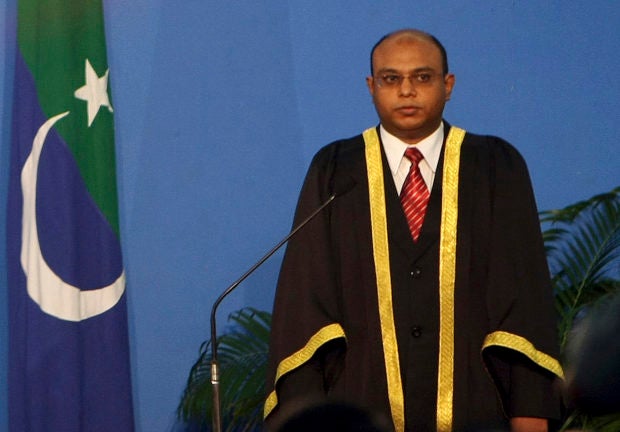 In this Nov. 11, 2008 file photo, Maldives Chief Justice Abdulla Saeed stands for the national anthem during the swearing in ceremony of President Mohamed Nasheed in Male, Maldives. A court in the Maldives on Tuesday, May 8, 2018, sentenced the country’s chief justice to nearly five months in prison on charges of obstructing government administration and justice. The criminal court sentenced Abdulla Saeed to four months and 24 days for allegedly preventing the Supreme Court from receiving letters from the government. (AP Photo/Sinan Hussain, File)

MALE, Maldives — A court in the Maldives has sentenced the country’s chief justice to nearly five months in prison on charges of obstructing government administration and justice.

The criminal court sentenced Abdulla Saeed on Tuesday to four months and 24 days for allegedly preventing the Supreme Court from receiving letters from the government.

Saeed was arrested in February during a political crisis that followed a Supreme Court order for the release and retrial of some of President Yameen Abdul Gayoom’s jailed political opponents because of alleged violations of due process during their earlier trials.

Maldives authorities arrested Saeed and another justice, who was on the bench, which ordered the release of the political prisoners, including Mohamed Nasheed, the country’s first president elected in a free election in 2008.

Nasheed was sentenced to 13 years in prison on terrorism charges but now lives in Britain after receiving asylum there while on leave for medical treatment. Nasheed’s release would have allowed him to contest a presidential election later this year in a formidable challenge to Yameen’s re-election bid.

After the arrests of their colleagues, the remaining three Supreme Court justices nullified their order to release Yameen’s opponents.

Maldives, known for its luxury island resorts, embraced multiparty democracy in 2008 but has lost most of its democratic gains since Yameen was elected in 2013.            /kga