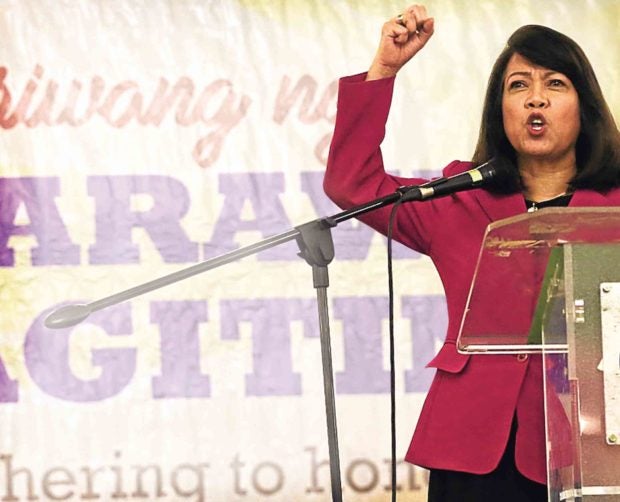 A CALL FOR HEROES “There’s no use for me to resign. Resignation is only for cowards,” Chief Justice Maria Lourdes Sereno told a forum at Adamson University in Manila on Tuesday. “What we need now is a nation of heroes. The time calls for millions of heroes. We don’t get democracy by calling a person ‘honorable.’ That’s not the essence of democracy.” —INQUIRER FILE PHOTO

Chief Justice Maria Lourdes Sereno will most likely be unseated by her colleagues on the Supreme Court on Friday, becoming the first constitutional officer to be removed not by impeachment.

The Supreme Court decision would preempt the impeachment proceedings against Sereno in the House of Representatives.

“The Chief Justice’s removal from [office] is a foregone conclusion. It’s a done deal,” a court insider told the Inquirer on Tuesday.

“It seems only a miracle of biblical proportions could prevent this historic event. I don’t know how Sereno could still dodge this,” the source said.

Even Sereno’s staunchest supporters have hoisted the white flag, calling on the people to participate in the so-called Jericho March in front of the Supreme Court building on Padre Faura Street in Manila hours before the special full-court session on May 11.

They said the justices’ intent to grant Calida’s petition, which primarily argues that Sereno’s alleged failure to submit her statements of liabilities, assets and net worth casts doubt on her integrity to lead the judiciary, was a “serious threat to our democracy.”

“Unfortunately, from all indications, it appears that … [the] majority [of the justices] will grant the petition,” a Sereno supporter said in a text message circulated on Tuesday.

“While the Chief Justice has moved for the inhibition of six biased justices, they have refused to do so without explanation. Their failure to inhibit taints the process and any decision on the petition,” it said.

Despite the overwhelming odds, Sereno was not about to give up the fight, telling a group of students on Tuesday to ignore the calls for her to quit to avoid the ignominy of being the first Chief Justice to be ousted by her colleagues on the top court.

“There’s no use for me to resign. Resignation is only for cowards,” Sereno told a forum at Adamson University in Manila.

“What we need now is a nation of heroes. The time calls for millions of heroes. We don’t get democracy by calling a person ‘honorable.’ That’s not the essence of democracy,” she said.

Another court insider said the number of Supreme Court justices who would agree with Calida would “likely reach as high as 11.”

“Since there are only 14 justices participating in the special [full-court] session, the ‘magic number’ is only eight. It appears Calida’s petition has already won the support of at least eight justices,” the court insider said.

“For most of the justices, they are not actually removing a Chief Justice … since Sereno was not legitimately designated when she assumed the post in 2012,” the source added.

Then 52, Sereno became the first female Chief Justice of the Philippines and the second youngest to head the judiciary when she was appointed by then President Benigno Aquino III.

Primed to occupy the highest judicial post for 18 years, Sereno might suffer the fate of her predecessor, the late Chief Justice Renato Corona, who was ousted from office after he was found guilty by the Senate of culpable violation of the Constitution.

The Chief Justice, who had been compelled by her colleagues to take an indefinite leave starting March 1, had demanded the recusal of De Castro, Tijam, Jardeleza, Peralta, Bersamin and Martires for bias against her.

One of the court insiders said acting Chief Justice Antonio Carpio and Associate Justices Marvic Leonen and Benjamin Alfredo Caguioa would vote for the rejection of Calida’s petition.

But the source said at least one of the three justices “believes that the Chief Justice could be held for culpable violation” of the Constitution.

Associate Justices Estela Perlas Bernabe and Mariano del Castillo “may also join the majority” while Associate Justice Presbitero Velasco Jr. “could side with Justice Carpio,” according to the source.

One of the court insiders said Tijam, who wrote the decision for the majority, gave a copy of his 150-page draft ruling to some of his colleagues on the court on Tuesday.

Sereno’s supporters said the justices had “refused to render justice and appear to be set to grant the unconstitutional and time-barred” quo warranto petition.

“Only the people can defend the Constitution. The consequences of the grant of the [quo warranto] petition will
be far-reaching,” they said in
a statement.

They added: “Impeachable officials can now be removed not for the serious grounds under the Constitution, but for the most trivial causes and at any time … [The] quo warranto will be a weapon to bludgeon officials into submission.”