Cry for justice rings out at priest’s burial | Inquirer News

Cry for justice rings out at priest’s burial 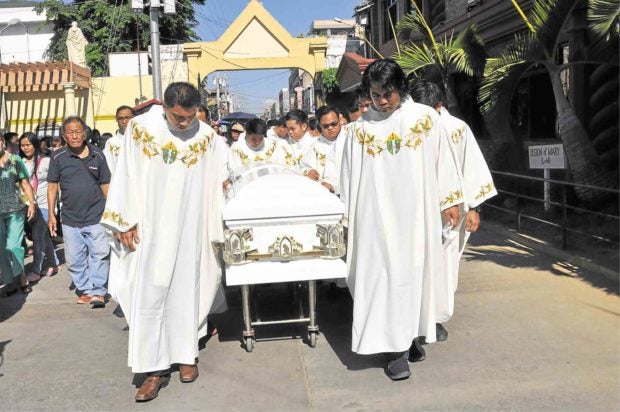 TUGUEGARAO CITY — The gunman who murdered Fr. Mark Anthony Ventura on April 29 ended a church career that the 37-year-old priest started only in 2011.

But no strong expression of outrage poured out at Ventura’s funeral here on Monday. Instead, the family and friends of the young priest vowed to live by his positive outlook on life.

Ventura, described by Catholic Church leaders as an antimining advocate, was killed by a lone gunman right after he celebrated Mass at a gymnasium in Barangay Piña Weste in Gattaran town, Cagayan province.

He was laid to rest at a cemetery here by his family and parishioners while they groped for answers on who and why he was attacked.

Hundreds paid their last respects to Ventura at the Saints Peter and Paul Metropolitan Cathedral here. Earlier on Sunday, long queues of people viewed the remains of their parish priest at San Isidro Labrador Mission Station in Gattaran.

Fifty priests, led by Tuguegarao Archbishop Sergio Utleg, condoled with Ventura’s family, and again urged the police to solve his murder. Some of the priests served as pallbearers while Utleg led the celebration of the Mass.

“We make our appeal to authorities, especially to the police task force, to act swiftly. Go after the perpetrators of this crime and bring them to justice,” Utleg said in his homily.

“There have been too many murders already done with impunity in our country… May this be the last,” he added.

Mae, Ventura’s sister, said the “overflowing love” from the community drew mixed feelings. She said the funeral made her sad because Ventura had just started serving the church, having been ordained seven years ago.

“We convey our collective feelings … [and express our] sad and sentimental gratitude,” she said at the Mass.

Parishioners appreciated Ventura for being “jolly, good, active and [for his] caring ways,” said a lay person, Theresa Remigio.

“His memories would serve as a reminder. Father Ventura always looked at the positive side of life. He took the hard route of serving a missionary church in far-flung [Barangay] Mabuno, but he did not complain,” she said.

Rodolfo Alvarado, a devotee, said “more hardworking priests like [Ventura] will serve the church because of his martyrdom.”

Although the family and the police had put up a P300,000 reward, no informant had surfaced to shed light on the priest’s killing.

A special task force has released an image of the gunman, who sports a mole below his left eye and a birthmark on his right cheek. He is said to be between 30 and 35 years old.

On Monday, police released an image of the second suspect, who drove the getaway motorcycle.

A coalition of human rights organizations on Monday called on the Commission on Human Rights (CHR) to launch a parallel probe into the murder of Ventura.

The Participatory Education on Rights Awareness and Social Action (Peras) also urged the government to make sure its investigation “produced results.”

“We call on the CHR to do a parallel investigation with the support of the different church denominations and the local communities,” Peras said in a statement.

The CHR earlier denounced the killing as part of a pattern of harassment against defenders of human rights in the country, and called on the government to solve Ventura’s murder.

Peras condemned in “strongest possible terms” the killing of Ventura, which it linked to his advocacy of helping the poor, and the church’s campaign against mining operations.

“Killing of church people who work for poor communities has been a constant blot in the country’s human rights record. Corporations, that are supposed to be monitored and regulated by the government … have been able to sustain their operations through the employment of corrupt military and police officers,” it said. —With a report from Melvin Gascon