China slams US criticism of its Taiwan demand 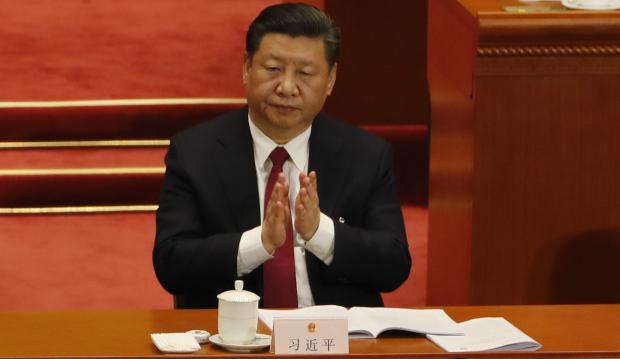 In this photo, taken on Friday, March 9, 2018, Chinese President Xi Jinping claps to applaud China’s Procurator-General Cao Jianming during a plenary session of China’s National People’s Congress at the Great Hall of the People in Beijing. The government of Xi has been increasingly assertive about its claims to Taiwan, which it has threatened to invade to bring under its control. (Photo by AIJAZ RAHI / AP)

BEIJING — China has dismissed White House criticism of its demand that foreign airlines not refer to self-ruled Taiwan as a country, saying companies operating in China must respect its sovereignty.

“Whatever the US says will never change the objective fact that there is only one China in the world and the Hong Kong, Macau and Taiwan regions are an inalienable part of China’s territory,” Foreign Ministry spokesman Geng Shuang said in a statement Sunday posted online.

Unlike self-ruled Taiwan, Hong Kong and Macau are Chinese territories operating with some degree of autonomy.
Taiwan’s independence-leaning president, Tsai Ing-wen, weighed in with a tweet, saying, “We call on all businesses to resist #China’s efforts to mischaracterize #Taiwan.”

The government of Chinese President Xi Jinping has been increasingly assertive about its claims to Taiwan, which it has threatened to invade to bring under its control. Delta Air Lines, hotel operator Marriott, fashion brand Zara and other companies have apologized to China for referring to Taiwan, Hong Kong, and Tibet as countries on websites or promotional material.

The White House on Saturday condemned China’s efforts to control how US airlines refer to Taiwan, Hong Kong and Macau, saying the push to make them comply with Chinese standards is “Orwellian nonsense.”

China’s Civil Aviation Administration has demanded the change from 36 foreign airlines, including some American carriers, according to the White House.

“This is Orwellian nonsense and part of a growing trend by the Chinese Communist Party to impose its political views on American citizens and private companies,” Sanders said.

She said the Trump administration is calling on China “to stop threatening and coercing American carriers and citizens.”

The harshly worded statement came as a high-level trade delegation led by Treasury Secretary Steven Mnuchin returned from negotiations in China and as Secretary of State Mike Pompeo spoke with a member of the Chinese Communist Party leadership.

In their telephone conversation on Saturday, Pompeo and Politburo member Yang Jiechi “affirmed the importance of a constructive, results-oriented bilateral relationship,” State Department spokeswoman Heather Nauert said in a statement.

Australian carrier Qantas is among the airlines told to change how they refer to Taiwan, prompting comments from Foreign Minister Julie Bishop that any such pressure is inappropriate.

“The terms that private companies choose to list destinations are a matter for them,” Bishop was quoted as saying by the Sydney Morning Herald newspaper. “There should be no pressure from governments, whether ours or others, that threatens the ordinary operations of business.”

The newspaper said Qantas declined to say what China had demanded it do, or what the penalties for non-compliance might be.

As China leverages the power of its massive domestic market to bend foreign companies to its political will, its retribution has sometimes targeted those firms’ online presence.

Regulators ordered Marriott to close its China-based website and app for one week after criticizing the company for referring to Tibet and Taiwan as countries in a customer survey.