The Philippines and United States officially commenced the 34th iteration of the Balikatan exercises on Monday at Camp Aguinaldo.

“Our nations expect us to be ready when they need us the most. So whether that threat is man-made or natural, we must be ready. That is the essence of Balikatan,” said Lt. Gen. Lawrence Nicholson, US exercise director.

About 8,000 Filipino and US soldiers (5,000 from the Philippines and 3,000 from US) will participate in this year’s drills that will be held from May 7 to 18. Australia and Japan will join as observers.

The exercises will take place in different locations in Luzon.

“The Balikatan exercise is an annual military training that manifests the longstanding relationship between the AFP and US Armed Forces. We will continue this commitment to strengthen our alliance to learn from both forces and improve our interoperability,” said Lt. Gen. Emmanuel Salamat, Philippines Balikatan exercise director.

The Philippines and US forces will hold the Balikatan exercises amid renewed concerns on China’s militarization of the South China Sea.

Quoting intelligence sources, US network CNBC reported last week that China has deployed land-based anti-ship cruise missiles and long-range surface-to-air missiles in the past 30 days in the Spratlys. 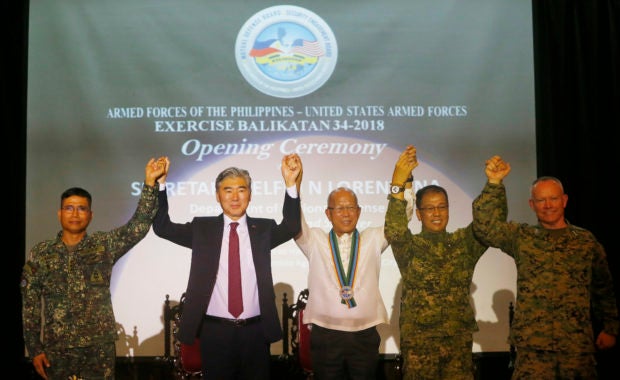 The deployment has raised concerns of several nations, including the US and the Philippines.

“This exercise has been long scheduled whether those missiles were there or not…But the exercise is not designed with the recent developments,” said Nicholson.

“From my side of the Balikatan, it’s the same size and scope that it normally is. The opening was just as great as normally it is…We have four nations here ready to train so I don’t see a whole lot different,” he added.

Meanwhile, the US Armed Forces will use assets such as C-130, C-17 Globemaster III, MV-22B Ospreys, and USNS Sacagawea. /ee