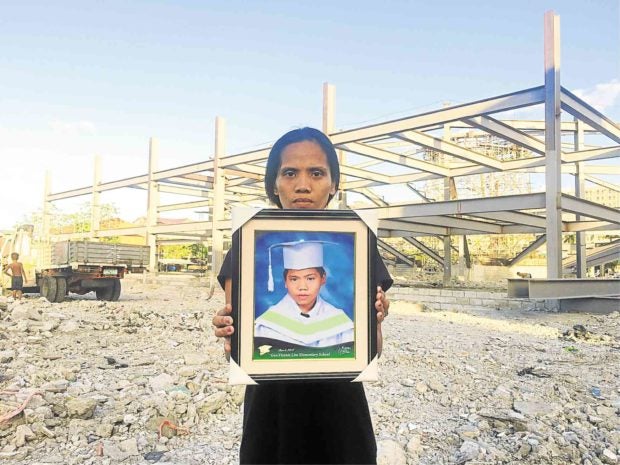 Michelle Pineda: We need to keep working on my son’s case. It’s the only way we know we can achieve justice. —KRIXIA SUBINGSUBING

The deaths of Delos Santos and Arnaiz in particular, who were gunned down as they were on their knees, begging for their lives, sparked widespread outrage in a nation that had become desensitized to the almost-daily killings.

Although 13-year-old Aldrinne Pineda was not a casualty of the war on drugs, his mother, Michelle, is hoping that he would not end up being a mere statistic; just another name on the list of supposed victims of police abuse.

“That would be my worst nightmare — that my son would be forgotten,” Michelle told the Inquirer in a recent interview. “That’s why we pray that Aldrinne’s death would somehow be like Kian’s.”

A Grade 6 student, Pineda was hanging out with his friends at the Vitas slaughterhouse in Tondo, Manila, when he was shot by PO2 Omar Malinao of the Raxabago police station on the night of March 2.

Malinao, who at that time was on duty against looters, had claimed he was running after a group of rowdy teenagers when he “tripped and accidentally pulled the trigger” of his 9mm firearm.

The lone “stray bullet” went through the boy’s stomach. He died eight hours later at Tondo Medical Center but not before telling his father that it was a policeman who had shot him.

Then came a twist in the case: It was later revealed that during the operation to remove the bullet in Pineda’s stomach, Dr. Sa-adi Sacar also took out his kidneys without his family’s consent, according to Michelle. The boy died the following day.

Commission on Human Rights (CHR) medico-legal officer Joseph Jimenez said that removing both kidneys when at least one was needed to survive was a “drastic move” that would require a “very good explanation” from Sacar.

No explanation from doctor

“I can only imagine what [Aldrinne] went through that night,” Michelle said. “He must have been in so much agony…maybe he might have lived were his kidneys not removed. The doctor did not even explain to us what he did.”

The family has since filed a formal complaint in the CHR, calling for an investigation of Sacar and another doctor, Timothy Jerome Venture, both of whom reportedly operated on Pineda.

Malinao, on the other hand, is facing two murder cases—one filed by the police in the Manila City Prosecutor’s Office; and the other filed by the CHR in the Office of the Ombudsman.

Hilda Clave, the Pinedas’ legal counsel, said that she would soon file a motion to withdraw the case in Manila to avoid being accused of forum shopping.

“We need to keep working on Aldrinne’s case. It’s the only way we know we can achieve justice,” Michelle said.

According to her, it was the knowledge that her son’s shooter was a policeman that made her family determined to pursue the case.

“Several people are trying to persuade us to reach a settlement with the Raxabago police. They say Aldrinne is already dead, that fighting back won’t bring him back. But I want [Malinao] to rot in jail. If he is free, he [may] do [what he did to my son] to other kids.”

“If [Sacar] is also liable for Aldrinne’s death, then he, too, must face the consequences. We were there, my grandson was fighting to live. He would have survived had the doctor made the right call,” Corazon, Pineda’s grandmother, added.

Though Pineda was technically not a casualty of the war on drugs, Villanueva said that the boy was still a victim of “[systemic] evil,” empowered by a President who promised to exonerate policemen who kill.

The Pineda family sees a long and tough fight ahead but they remain hopeful. “At least [Kian] got the justice he deserved and the cops who killed him now face trial. As for us, we have yet to see the face of Aldrinne’s killer. Maybe, if we press harder, we, too, will have our day in court,” Corazon said.