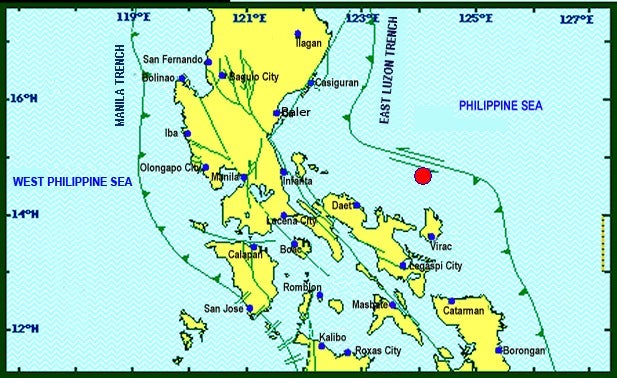 A magnitude 6.0 earthquake jolted Catanduanes on Saturday afternoon, the second one had been recorded earlier the same day by the Philippine Institute of Volcanology and Seismology (Phivolcs) said.

In a phone interview, Dr. Renato Solidum, Phivolcs chief, said the quake’s epicenter was traced at 69 kilometers north of Pandan town in Catanduanes province at 2:19 p.m.

Solidum said the quake was tectonic in origin.

Earlier, the province of Catanduanes was also hit by a magnitude 4.6 quake. Phivolcs clarified that the second quake was not an aftershock of the previous one.

The quake lasted for several seconds and was also felt in some Metro Manila areas.

The agency advised the residents to take extra caution for possible aftershocks.

Residents in the cities of Naga and Legazpi, the provinces of Camarines Sur, Catanduanes and Albay took to social media to express shock regarding the earthquake, which they said was able to rock some of them awake and caused light furnitures to move.

The tremor was the second earthquake on Saturday after the 4.6-magnitude quake that was also recorded in Catanduanes. with reports from Mark Francis Banay, Gernie Delgado, Inquirer interns  /jpv