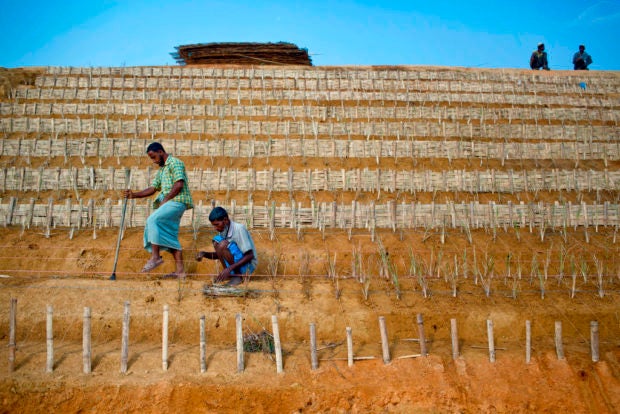 In this April 30, 2018, photo, Rohingya refugees plant grass on a hill to prevent landslides as preparation for the upcoming monsoon season at the Kutupalong Rohingya refugee camp in Kutupalong, Bangladesh. Rohingya refugees, who fled Myanmar during a brutal crackdown, now face a new danger: rain. The annual monsoon will soon sweep through camps where some 700,000 Rohingya Muslims live in huts made of bamboo and plastic built along steep hills. (AP Photo/A.M. Ahad)

KUTUPALONG, Bangladesh — The Rohingya refugees have escaped soldiers and gunfire. They have escaped mobs that stormed through their villages, killing and raping, and burning. They have fled Myanmar, their homeland, to find shelter in sprawling refugee camps in neighboring Bangladesh.

The annual monsoon will soon sweep through the immense camps where some 700,000 Rohingya Muslims have lived since last year, when they poured across the border in search of safety. The clusters of bamboo and plastic huts, built along endless waves of steep hills, are now facing a deluge that, in an average year, dumps anywhere from 40 to 60 centimeters (16 to 24 inches) of rain per month.

“I will not be able to light a fire. The wells will flood and I won’t be able to get water. The outhouses will be destroyed. The house might also break down,” sobbed Rahana Khatun, 45, who fled Myanmar last year with her husband and five children. “What will happen to us then?”

“I have fled my country. I am grateful to Allah for the little I have here in Bangladesh,” she said. “But now the rains are coming and I am so worried!”

Government authorities and aid agencies have warned of a catastrophe if there are heavy rains this year. The monsoon usually reaches Bangladesh in April and reaches its peak between June and August, bringing almost daily downpours. Occasional rains have already hit the camps this year, with the full monsoon expected in the coming weeks.

Aid agencies are now pre-positioning supplies across the camps, since flooding could easily block paths to food, water and medical care. With most of the area’s foliage long gone, stripped away by refugees looking for firewood, little natural protection remains against mudslides.

The early rains have already loosened the dirt on steep hillsides, and tons of earth has shifted in some places. While a handful of people have been relocated, most remain at risk.

“There are no more trees, no more roots, so there could be massive landslides, burying people that live at the bottom of the hills” and carrying away those who live on hilltops, said UNICEF spokesman Benjamin Steinlechner. “So that is the major risk.”

An even bigger worry is cyclones forming in the nearby Bay of Bengal.

Cyclones used to regularly kill thousands in Bangladesh, with the storms sweeping through low-lying areas and devastating everything in their path. The country has made remarkable progress against the storms over last few decades, installing networks of warning systems and fortified shelters. But there are no reinforced shelters in the camps.

The Bangladesh Red Crescent Society estimates that at least 100,000 refugees will be exposed to extreme dangers during the monsoon.

“We are reaching out to the people right now to make sure that they know where to go in case they find themselves in an emergency situation,” he also said.

Construction workers are building 200 new homes in part of the Kutupalong camp. The homes, funded by overseas donors, will have concrete floors, bamboo walls and tarpaulin roofs. Other workers are planting grass and trees around the homes to help prevent erosion and landslides.

But even those homes, some of the best for kilometers (miles) around, would not be able to withstand a major storm.

“It’s not enough, not at all,” said Dipu Dhali, a construction foreman. “Only 200 families will be relocated here, but what will happen to thousands of other families?”

While some Rohingya refugees have lived in Bangladesh for decades, hundreds of thousands more fled here after Myanmar security forces launched a scorched-earth campaign in late August in response to attacks by a Rohingya insurgent group.

Thousands of people are believed to have been killed in the crackdown, which many rights activists believe was a calculated attempt to drive Rohingya from the country.

Rohingya are denied citizenship in overwhelmingly Buddhist Myanmar, where they have long faced persecution. Many in Myanmar see them as illegal migrants from Bangladesh, and deride them as “Bengalis.” Most have long lived in poverty in Myanmar’s Rakhine state, next to Bangladesh.

In the camps, residents are doing whatever they can to prepare for the rains, using sandbags, ropes, and bamboo.

Hazera Begum helped her husband on a recent day to reinforce their home, in the steep hills of the Balukhali camp, with more bamboo and plastic sheeting. They know they cannot completely protect themselves, and are simply hoping for the best.

Read Next
LTFRB: TNC cabbies can now be rated by passengers using mobile app
EDITORS' PICK
Senate bill seeks to penalize employers requiring employees to work during rest hours
Acer starts the year off strong with the Aspire Vero National Geographic Edition
Gear up and get ready to play with Yamaha Mio Gear
Marcos-era elections: Not what his son signed up for
If elected VP, Sara Duterte will push for mandatory military service for all Filipinos
Over 3 Million worth of prizes to be won at Smart Padala’s SENDali Manalo Promo!
MOST READ
Jose Manalo’s son Benj pays tribute to late mother: ‘You’re a testimony of God’s love’
‘Sampal sa gobyerno:’ Drilon wants unvaxxed PAO chief barred from working
Ferdinand Marcos’ elections: Not the same as the one his son is now taking part in
Vice mayor slams Vico Sotto for turning Pasig into a ‘puro palabas’ city
Don't miss out on the latest news and information.