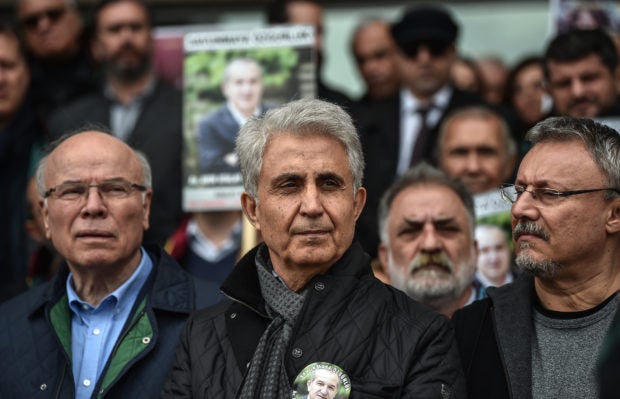 Cumhuriyet daily’s cartoonist Musa Kart (center) stands with colleagues as they attend a demonstration at the courthouse in Istanbul on March 15, 2018. A group of Turkish journalists have staged a protest urging the freedom of all jailed colleagues, after the chairman of an opposition daily marked spending 500 days in prison. On Thursday, May 3, 2018, Kart, who has been convicted of helping “terrorist” organizations and sentenced to nearly four years in prison, was awarded a top prize by the organization Cartooning for Peace. (AFP FILE PHOTO / OZAN KOSE)

Turkish cartoonist Musa Kart, who has been convicted of helping “terrorist” organizations and sentenced to nearly four years in prison, was awarded a top prize on Thursday by the organization Cartooning for Peace.

The Swiss group hands out the honor, known as its International Editorial Cartoons Prize, every two years.

“The jury has chosen Musa Kart, iconic cartoonist of the Istanbul newspaper Cumhuriyet, for his talent and courage in the defense of freedom of expression,” a statement from the group said.

Cumhuriyet – which means simply “Republic” – was set up in 1924 after the Turkish republic was founded in 1923.

It has been fiercely critical of President Recep Tayyip Erdogan, and has run front-page stories that have angered the Turkish head of state.

A Turkish court last month handed out multiple sentences to 13 journalists and executives from the paper for “aiding and abetting terror organizations”, but the group remains free pending appeal.

Kart was sentenced to three years and nine months in prison.

The prize was judged by an official from Geneva’s government, the head of Human Rights Watch Kenneth Roth, along with cartoonists from leading publications including Le Monde, the New York Times, and The New Yorker.

“Musa Kart is both a witness and especially a victim of the deterioration of freedom of expression in Turkey,” a Le Monde cartoonist known as Plantu said a statement.

Kart has denied the allegations against him.   /kga