Senate urged to fight for right to try Sereno 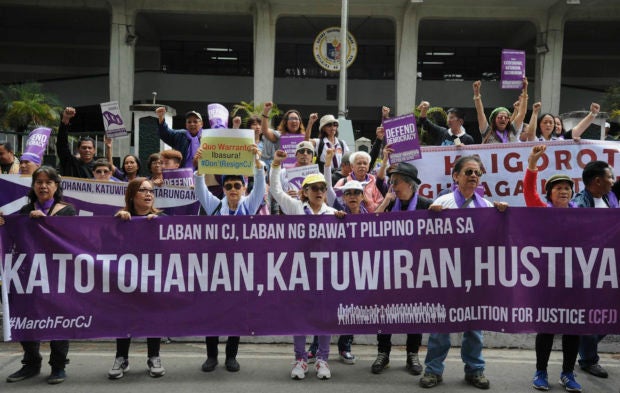 A broad coalition of activists, lawmakers, church and civil society leaders, artists and journalists on Wednesday prodded the Senate to fight for its constitutional right to try Chief Justice Maria Lourdes Sereno by asking the Supreme Court to suspend its deliberations on a challenge to the appointment of the country’s top judge.

The group, composed of more than 350 people of varied political leanings, also asked the justices to respect the

The Coalition for Justice (CFJ) made its move barely a week before the high court was expected to rule on Calida’s legal action, which was hinged on the Chief Justice’s alleged failure to submit all of her statements of assets, liabilities and net worth before her appointment in 2012.

Several court insiders said the 14 justices had agreed to conduct a special full-court session on May 11 to vote on the quo warranto petition.

Preemption of the Senate

Members of CFJ trooped to the Senate building on Wednesday to distribute letters and a copy of their petition to the senators’ offices, appealing to the lawmakers to intervene and expessing concern that the justices might rule on Calida’s petition before Congress, now on recess, resumes session on May 15.

The implication of such a move, according to former Bayan Muna Rep. Teddy Casiño, is to preclude an impeachment trial in the Senate, since granting Calida’s petition means Sereno’s outright ouster.

“Therefore the Supreme Court is preempting Senate action. This is an insult to the power of the Senate to try an impeachable official. This is a betrayal of the principle of separation of powers and of checks and balances,” Casiño told reporters at the Senate.

The CFJ asked Senate President Aquilino Pimentel III to call a special session or to pass a resolution asking the Supreme Court to suspend action on Calida’s petition and invoking the Senate’s constitutional mandate as the only body with the power to remove impeachable officials.

But the group’s request may not be possible, as only the President may call Congress to a special session when it is on a break.

Congress resumes its regular session on May 15.

At least one senator supported the CFJ plea.

In a message from her detention cell at Camp Crame in Quezon City, Sen. Leila de Lima asked her colleagues to heed the group’s call by filing a resolution urging the Supreme Court to suspend the proceedings on Calida’s petition.

In a statement published in the Inquirer on Wednesday, CFJ said granting Calida’s petition would be illegal and a betrayal of democracy.

Former Sen. Rene Saguisag, a member of the Constitutional Commission that drafted the 1987 Constitution, and former Vice President Teofisto Guingona Jr. were among the prominent citizens who signed the message to the Supreme Court.

The signatories, including  opposition Senators Francis Pangilinan and Antonio Trillanes IV and members of the Makabayan party-list bloc, said the justices eschewed their primary duty when they acted on the “illegal and unconstitutional” petition brought by Calida.

“We challenge the Supreme Court: Pull back from the brink. Do not be a party to the death of  judicial independence. Heed the Constitution,” the group said in the double-spread advertisement.

“In accepting this farcical petition, it crushes [the] constitutional checks and balances. It threatens every Filipino citizen’s right to a free, impartial justice system,” the group said.

It also urged the tribunal to “compel” five of its members—Associate Justices Noel Tijam, Teresita Leonardo-de Castro, Diosdado Peralta, Lucas Bersamin and Francis Jardeleza—to recuse themselves from participating in the deliberations for their supposed bias against Sereno.

All the five justices had testified against Sereno in the impeachment proceedings against her in the House of Representatives.

“If the ‘Biased 5’ will not inhibit, then we call on them to resign. The people will not accept any decision tainted by gross injustice and justices who cannot act with justice,” the group said.

“The five justices bowed to Congress’ impeachment summons … [In] doing so, they prejudged the Chief Justice and betrayed the court’s position as a coequal branch of government,” it added.

CFJ likewise reminded the justices that existing jurisprudence was replete with the Supreme Court’s own rulings that impeachable government officials may only be removed through the impeachment process in Congress.

Besides, the group said, Calida brought the petition beyond the one-year limit in initiating such legal action as spelled out in Rule 66 of the Rules of Court.

“We repudiate as illegal a ruling tainted with these shameful acts,” the group said. “The state derives its power from the people. When the key instruments of the state conspire to subvert the Constitution and democracy, the people must rise as the last bastion of our rights and freedoms.”